If you’re anything like me and you’ve been investing in sports cards for some time now, our world has been turned a little sideways with COVID-19. That’s not to say that this in any way is a comparison to the hardship faced by those directly affected by the virus, and my thoughts go out to all of you in that position.

But, some of us may have invested heavily in sports cards, or some of us plan to resume this hobby once normalcy begins to return. Geoff has done a tremendous job of keeping us all in the loop on card pricing, and his card movers tool is a wonderful resource to continue your research and buying.

I wanted to offer some additional value from my experience over the past year of investing and collecting in light of the situation to help you all who may be wondering what’s next and how you can be best prepared.

I am not in any way, shape, or form a financial advisor. Please only spend within your means, especially at a time like this. With that said, I’m very optimistic about the future both in cards and in general with business, people, and our communities. A time like this, a hardship will force the hand of discipline, reform, and innovation. Businesses and people will think twice about how they invest their money and, in some ways, will get smarter about those investments. So how does this affect the card market?

TL/DR: My theory is that short-term investments will be most affected by the current market conditions (for an unknown period of time), but long term investing will still be a viable option, so long as you know how to think like a collector. This article will help you get better at thinking like a collector.

Short-term Investing is much more difficult.

Sports cards, like anything, are a function of supply and demand. We’re all (hopefully) familiar with population data. We know the card supply has been increasing, and up until a month or two ago, demand was furiously outpacing that.

But now, with no sports, and economic activity slowing, there’s less of an opportunity with short-term investing. It’s not entirely gone – look at Jarrett Stidham, for example, as his prices have increased at the prospect of him being the starting QB for the New England Patriots.

However, I think short-term investing is still very difficult right now. Unfortunately, there will not be more 50-point nights from Trae Young to shoot his base Prizm card values up.

Short-term investing comes with some risk and is not easy by any means, but it’s an option available to more people looking to get into sports cards.

What I mean by that is this: the barrier to entry is lower in terms of cost and knowledge to be successful at short-term investing. More people can afford a $5 Devonte Graham card, and when he strings together a bunch of strong performances, flip it for $50 (not actual data, this is illustrative).

Now, things are a little trickier. That’s not to say when things return to normal, there will be a huge opportunity here, but if you want to continue to invest, I think you need to start looking at long-term investments.

Long-Term Investing Can Be More Expensive, and Harder to Get Right, But It Might Sustain Better in Economic Downturns

PWCC has a neat little tool that shows how the Top 100, Top 500, and so on cards have performed against the S&P 500 index funds for the past decade.

What you will notice is that the top 100 sports cards performed much better than the S&P 500 since January of 2008 and increased (although more slowly) during the financial crisis, while stocks dipped:

Does this mean sports cards are a better investment than stocks!?

The top 101-2,500 cards had a positive ROI, and didn’t decrease as much as stocks during the financial crisis in ‘08, but overall, the S&P 500 performed better:

So, what the heck does this mean?

The data suggest that the longer-tail of cards, meaning the higher population, less expensive, modern, more “common” are more volatile in economic downturns and don’t produce the same returns as the S&P 500.

PWCC ranks cards based on current market value and the most modern card in the top 100 list is the 1996 Kobe Bryant Topps Chrome Rookie. The rest are cards from a different era (the 1993 Derek Jeter is the second most recent).

From this data, we can infer the following hypothesis: historical, rare cards that are highly sought after by big-time collectors with big-time money do out-perform stocks in terms of ROI, and do appear to be less volatile in an economic downturn.

With short-term investing on-hold, the next best option is long-term investing, but the majority of folks aren’t about to buy a Michael Jordan ‘86 Fleer PSA 10.

Side note: I could write a whole article about looking at the themes of the Top 100 cards. Sport, Historical Relevance, Card Population, Player, Championship History, etc. to find parallels in more modern cards (like Lebron James, for example), but this is not that article.

For those of us who aren’t going to do the above, and don’t have the capital to spend big money on big cards, what do you do?

From this data and my experience in the hobby, I came up with a theory given that short-term investment opportunities are relatively absent: while buying into the Top 100 or even 500 cards or trying to predict the future Top 500 cards is an excellent strategy, it is too expensive for most of us, but if you are investing in cards right now, you should buy the cards of aplayeror sport that a collector will eventually want.

What I’m saying here is that you don’t need to buy the $400,000 Mickey Mantle, but owning 10 Luka Doncic Prizm PSA 10 base cards isn’t the right tactic either in this environment. I’m suggesting you try to own the rarer, higher-end, more visually appealing cards of the “long-tail” modern, more widely circulated cards.

This requires thinking like a collector, and if you have made it this far into the article, you’re in luck, because this is the best part:

Personas are widely used in product management, marketing, and sales departments in all kinds of companies and serve a straightforward purpose that’s going to make you a better sports card investor. In essence, they’re incredibly detailed descriptions of their customers that can inform what products/services to invest in building and how to message, sell, and retain those customers.

I won’t bore you with the details, but what we need to do is to build a sample persona of a sports card collector – me!

I chose myself because there’s one thing that I’ve noticed:

I have stopped buying cards for the past two months, but just this weekend, I was more than excited to buy into a Pick Your Team, National Treasures Football Box Break. I rarely, if ever buy into these breaks, they’re a terrible ROI, but boy are they fun.

I didn’t quite do it for fun, though: I did it because I’m hunting Miles Sanders National Treasure Rookie cards, even during this uncertain time.

Why? Because I’m a collector of his. We need to get at why I’m collecting his cards and what I’m looking for, because even at an uncertain time, I may be willing to pay bigger dollars for his best cards.

Jonathan Torrey is a 30-year-old male currently residing in Burlington, Vermont, working at a technology company as a Product Manager. He is a Philadelphia native and a die-hard Eagles fan. He’s watched them growing up and has formed a particularly strong bond with his Mom over the sport. Living in Vermont, Jon often connects with other Philadelphia-born people to watch games at the local Eagles bar, Finnigans. After the Eagles won the Superbowl, Jon’s emotional attachment to the Eagles grew even fonder.

Once he began investing in sports cards, he couldn’t help but start collecting cards of his favorite Eagles players.

The most important thing to note about Jon is that he is a huge fan of Penn State, and went to a few of their games.

Miles Sanders is the first-ever player he’s seen play in college in person to get drafted by the Philadelphia Eagles.

It may seem a little weird to write about myself in the 3rd-person, but what does this tell us about what cards to buy that appeal to collectors?

A lot of what I see outside the hobby and even in it, sometimes, is people questioning why on earth someone would spend thousands of dollars on a sports card.

Based on my persona, you can see why someone might, right?

If you’re not convinced, look at this card: 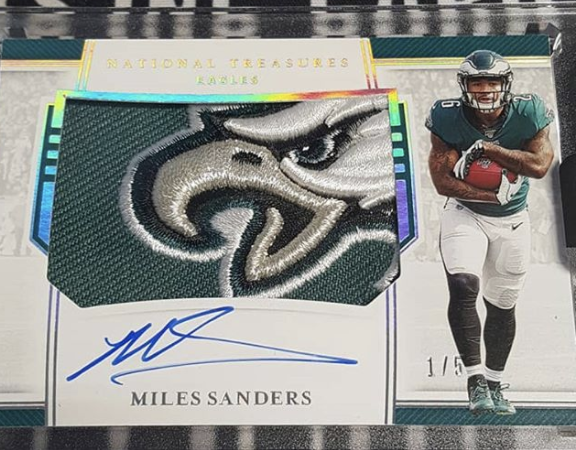 For someone who grew up with the Eagles, who loves Penn State and saw Miles play in person, tell me this isn’t a card worth spending a little irrationally for.

It’s something I could look at in 50 years and feel the rush of nostalgia from tailgating at Penn State, being in Beaver Stadium, watching Miles get drafted by the Eagles and calling your Mom in excitement.

You don’t need that $400,000 Mickey Mantle; you need to think like me and know what cards I’m still after even in complete economic uncertainty.