Basketball card collectors get a lot of their cards graded by PSA (and other grading companies). Every year tens, even hundreds of thousands of cards get sent in for grading.

It’s possible to track the history and health of the basketball market by looking at the PSA POP data to see which cards, sets, brands, and years are the most graded.

This article visualizes 70 years of basketball cards using the PSA population data in various ways to better see the trends, changes, and growth over the years.

The below chart shows the basketball card market since the first Topps set in 1969 until 2019.

The overall height of the data represents the number of cards graded that year. The different colors are the major basketball card brands. So you can see the overall market trends and how each brand has ebbed and flowed over time too.

The notes in the chart explains noteworthy events and how they changed the basketball card market. Major rookies like Michael Jordan, brands entering the market, or new sets all have an impact on the overall market.

As grading has become more popular, collectors have started sending in their cards for grading right after opening them. Gone are the days of dinging up the corners or putting greasy fingers on the front. With this change the PSA grade distribution has drastically changed too.

How will this impact card prices in the future? PSA 10 will no longer be as rare as it once was. Will collector’s continue to pay big premiums for top grades if they aren’t as rare? 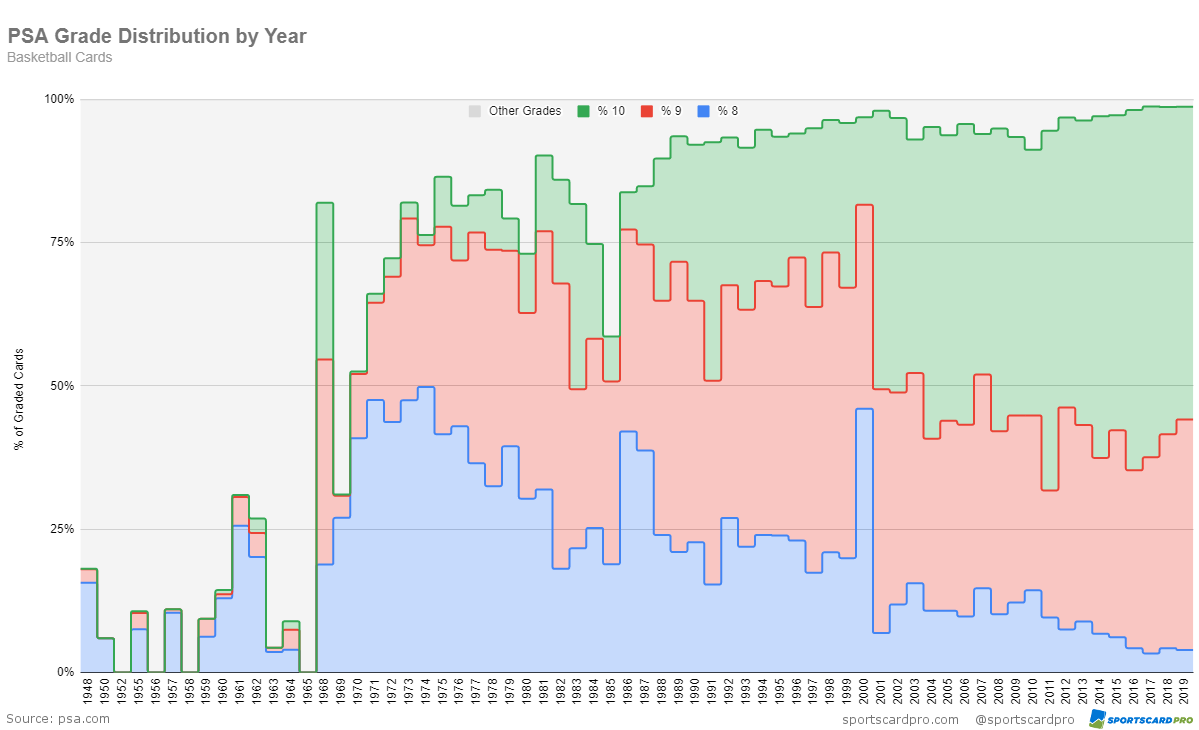 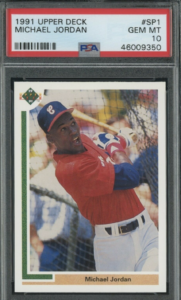 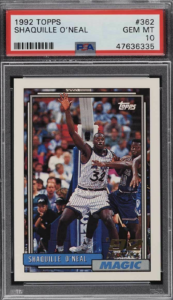 Not only has grade distribution shifted towards PSA 9 and 10, the total population of cards has shifted higher.

Virtually all of the recent growth in PSA grading has occurred at PSA 9 and PSA 10. PSA 8 and other grades haven’t even reached their 1980’s peaks.

You can see spikes in population in 1986, 1996, and 2003. The rookie years for Michael Jordan, Kobe Bryant, and LeBron James respectively. 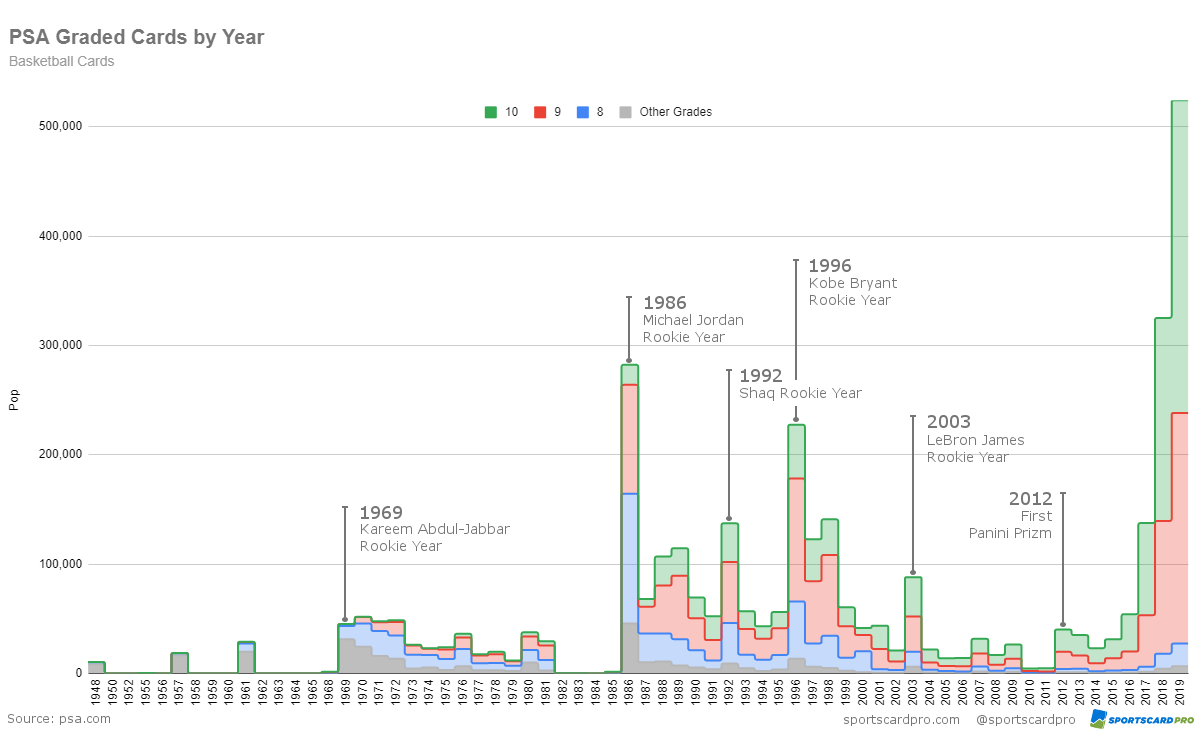 Panini Vs Topps Vs Fleer: Percentage Of Graded Cards By Year

The basketball card brand favored by collectors has changed drastically over time. Right now, Panini is virtually the entire graded card market with only a few sets from other companies being released. Fleer was the favorite of collectors though in the late 1980’s.

See how the graded market share has changed since 1986 until today. 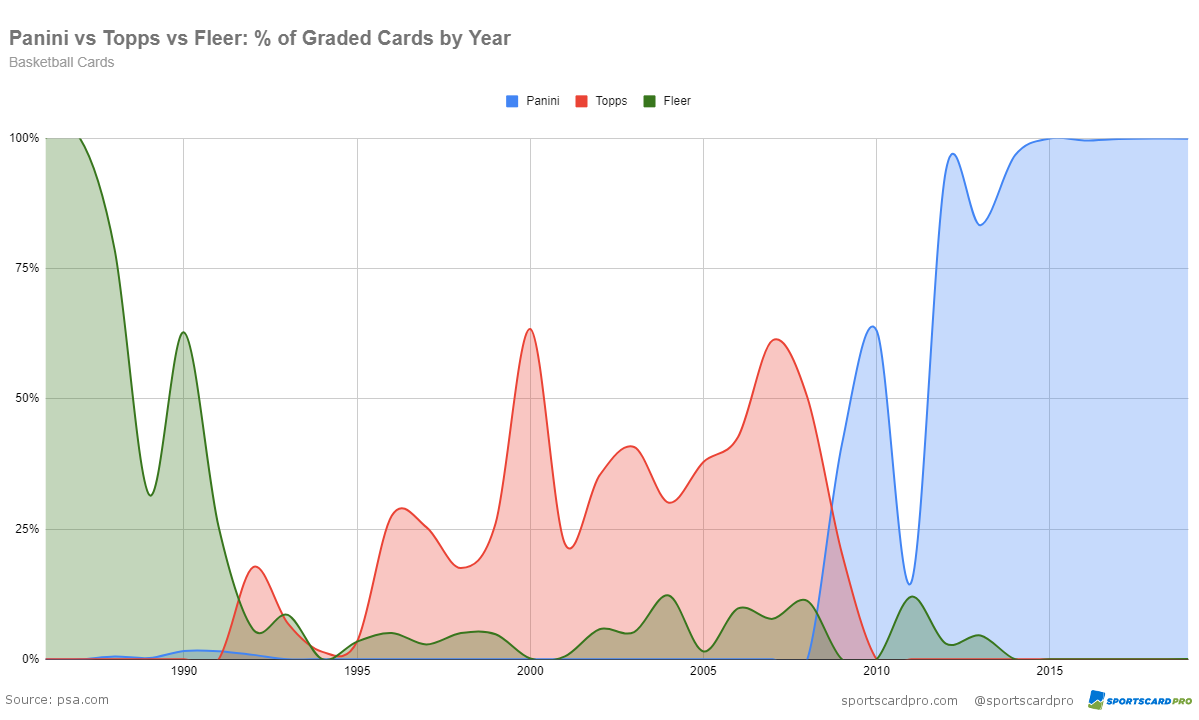 Market Share by Year: Panini vs Topps vs Fleer

Number Of Sets Per Year Vs Total Population

You can see the rise, crash, and rise again in the sports card market in this chart.

Before the 1980’s only a handful of a sets were released each year – Topps and regional/food branded cards. As the hobby grew in popularity manufacturers released more and more sets. But the number of cards that people thought were worth grading was gradually declining.

In 2012 Panini released their first Panini Prizm set along with many parallel sets. The total number of sets jumped back up to more than 500 in 2019, while the population skyrocketed at the same time. 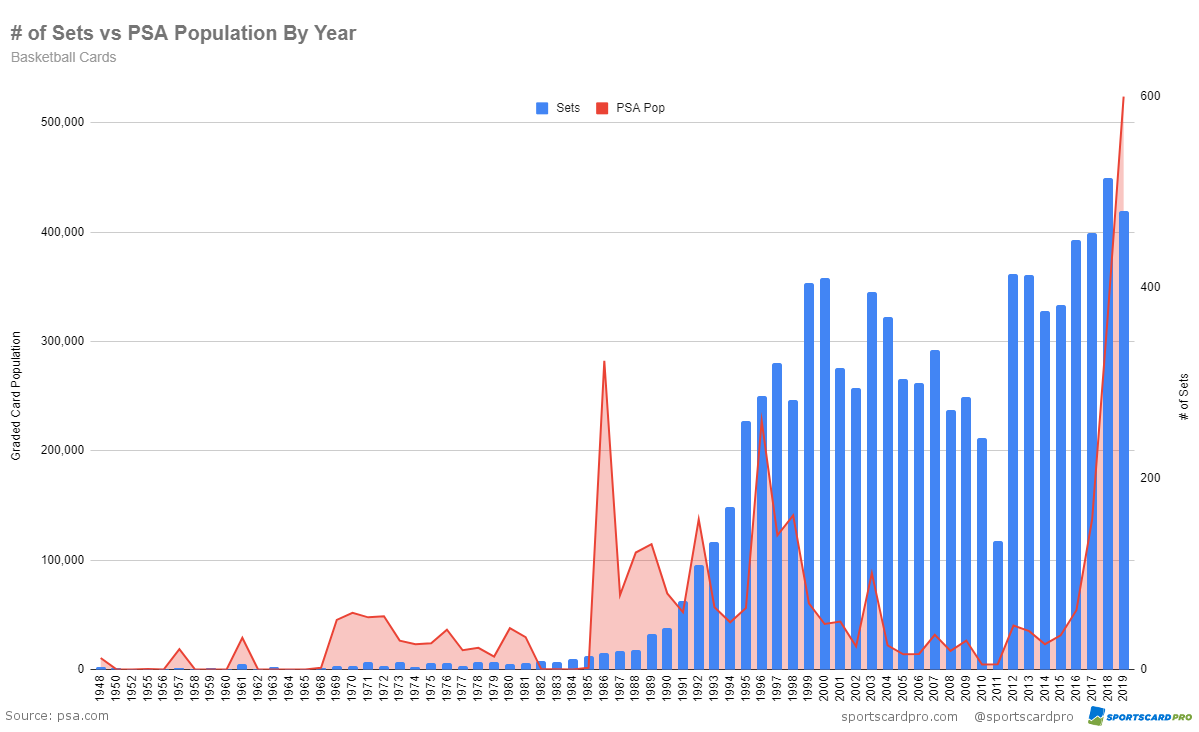 Number of Sets vs Card Population

Most Graded Basketball Card Sets Of All Time

A list of the basketball card sets with the highest overall PSA population. These are the sets that collectors favor the most.

The list is dominated by recent Panini sets and 1986 Fleer set with Michael Jordan and many other top player’s rookie cards.

Most Graded Basketball Sets of All Time

A chronological list of the most graded set per year. This is the basketball card set with the most PSA graded cards that year.

Topps was the most popular set the most times, with other brands leading the pack for a little while until they were dethroned by another popular set.

Most Graded Basketball Set Per Year

This article was a great example of significant research and time that many of you put into the hobby to maximize your investments/collections. We appreciate our friends at SportscardPro.com and JJ for the work on these graphs. Do you have any examples of charts, spreadsheets, graphs, or any other data that helps you maximize your profit? If so, we would love to hear from you!