First of all, let me start by saying Magic the Gathering (and Pokemon to some extent) is foremost a card game. I.e., the cards are primarily purchased for the primary purposes of putting together customizable playing decks which you can spar with your friends or if you are skilled enough – to enter into professional tournament play. I was a professional Magic the Gathering player between 2013 to 2018. During this period, I naturally purchased an assembled a lot of cards. Card prices fluctuated depending on the popularity of decks (and the cards within them) that were being played at that time. Hence the natural supply and demand laws dictated the movements in card prices.

However, when it came to investing, none of the above actually applied. You see, Magic the Gathering is a card game that caters to an audience of over 15 million globally, the print runs were astronomical. There was no serial numbered cards and you hardly consider investing in cards that you actually play with. Imagine shuffling up your Lebron James Rookie Cards over the kitchen table and dealing it out to your 10-year-old son. Magic the Gathering cards also had a lifespan, meaning certain cards could only be used/played for a certain amount of time (example18 to 24 months). Meaning when a certain card’s useful life has “expired,” it basically goes into cold storage and prices plummet. Before you start gasping, it’s unlike a stock market crash. Having your deck “expiring” could mean that the $100 to $1000 you paid for the cards would dwindle by more than 75%. But you would also need to consider the hours of play and use you had with it; hence, it’s almost comparing your deck to your private car’s useful life.

So where were the investment opportunities in Magic the Gathering? Vintage.

Magic was first released in 1993 with a set called Alpha, followed by a subsequent set called Beta. Both sets had 295 cards and 302 cards, respectively. Both had identical cards (except seven additional cards in Beta). However, the print runs on these sets were 1100 and 3300, respectively. While these numbers looked high, many were used, played, destroyed in its early years and hence obtaining Near Mint to Mint copies was rare. Enter true scarcity. Magic the Gathering investing is defined by their set of Holy Grails – the Power Nine. The Power Nine represents a set of nine cards (both available in Alpha and Beta), which is the centerpiece of any investor. When the Cryptocurrency boomed in late 2016, a lot of fresh money entered the Magic the Gathering industry and the number of “investors” grew exponentially and Power Nine cards were being snapped up. The Alpha Black Lotus at Gem Mint BGS 9.5 condition, the grail of the entire Magic the Gathering universe, rose from circa $30,000 to $88,000 in June 2018 to $167,000 in March 2019 and today sits well above the $250,000 to $300,000. The astronomical rise in prices was unprecedented in its 25 years plus history.

However, Magic the Gathering has since cooled off a little due to the global situation and most investors (myself included) have taken profits off the table. Despite all that, Power Nine prices have remained constant and did not freefall despite investors slowly exiting and cashing on their portfolio. I emphasize the word slowly, as there is only a finite number of Power Nines (and people holding on to them), so investors took their time looking for the right buyer and exit price. In conclusion, with little or no new money spurring another round of growth, prices should remain stable for years to come.

Having read all that, what are the salient points we see versus the sports cards boom we are all experiencing today:

What are the dangers

If there were only 5,000 sports cards investors globally at the start of 2020, there are probably 50,000 today. What differentiates Investor A and Investor B is how much capital each individual affords to deploy. Hypothetically if my numbers were accurate and each new investor brought in $1,000 a month since January, that’s $270 million of new money coming in. Pretty sure the numbers are way more extensive. Sports Card Investor Youtube channel already has 47,000 subscribers! But you get the perspective. It is this new money that drives demand and upward pricing. 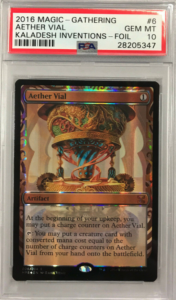 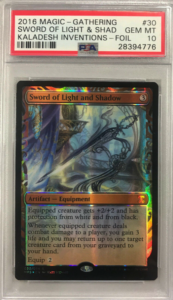 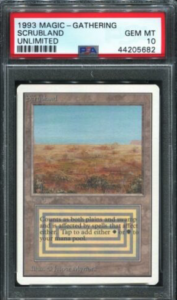 It’s rather obvious to point out here, but someone learning Magic the Gathering would think if the card isn’t good (for playing), its not worth paying for. Translating that into sports cards, your safe bets should always be on established players. It’s fine if an established player has an off night, as that won’t affect drastically. However, putting money into a “potential star” that doesn’t or has yet to contribute regularly doesn’t seem to be a worthy investment, in my opinion. Comparing to Magic, it’s buying a card whom you think is good, but the market (tournament scene) doesn’t agree with you.

We all know this. We all are good at this. But yet certain cards with the wildest population numbers are still rising. Magic base cards (cards that were used for play and printed by the millions) had little to no investment value. Sports cards are not printed in that type of print runs, but I stand with my belief that eventually, cards with real scarcity will be the only form of safe investments and prices have no other direction but up.

Grails are King in good times, but illiquid in lulls

We all know about the Lebron James Exquisite Rookie Patch Auto that sold for a whopping $1.8 million. The seller pulled the trigger to cash in at the right time, where interest is at its peak. Lebron James is at the height of his career and he’s only a few steps in creating more history to his legacy. The Exquisite RPA is THE Holy Grail to any Lebron collector and its no surprise at the amount of money being thrown at it.

However, if you take a step back and imagined the sports cards industry to be in a lull, investors would shy away, as they may never know when the next boom will come. Sure there will be some wealthy collectors who would like to add to the Lebron RPA to his personal collection, but my point is that there are so many eyes on this Lebron in today’s market as compared to four years ago when it first exchanged hands for $46,000. The 40x in price growth is the testament of the market size today. But will see another 40x on Grails down the road if the market cools? There are called Grails for a reason; to some, it’s worth a fortune (financially and emotionally); to others, it may just be something way too expensive to own.

Unlike Magic, where players/collectors can sometimes just outgrow it and move onto real-life commitments: college, buying a new home, starting a family, etc. On the other hand, sports are almost eternal at every age point you are. Depending on your individual financial situation, I don’t see interest in sports slowing down anytime soon and the interest in the hobby will continue to move upward steadily. For those like me who recently jumped ship, this is a promising sector and time to be in the hobby.

I’m seeing some content out there now of people pulling their old Pokemon collection out of the woodwork. I’m not into Pokemon, but having studied Pokemon as an investment (being the younger brother of Magic the Gathering), it follows similar patterns to Magic and sports cards but with many different exceptions. I’ll leave you guys to explore on your own.

We recently had an article comparing sports cards versus Pokemon and in that article, Karmy touched briefly on Magic the Gathering. This was a great article going more in-depth with the Magic brand and how you, as investors, can use what you’ve learned in The Hobby to possible pivot into other markets as well. Like always, if you have any comments or you would like to write an article for the community, we would love to hear from you!

What Sports Cards Will Go Up Over the Weekend? (MLB and NFL)

New Sports Card Charts that Will BLOW YOUR MIND! 📈