When we are talking about Precious Metal Gems (PMG’s for short), we are talking about an event that happens more often than you’d think. When flipping or investing in sports cards, the key is not finding rarity, but instead knowing the difference between rarity and scarcity, the latter of which is simply rarity plus demand. You see, before 2016, a PMG could be picked up for a few hundred dollars, only a few demanded north of $1000. But when the demand crept in, all hell broke loose, and now we have many PMG cards going for six figures.

Like any investment, it’s key to look at history and find out not just the patterns that came into play but also the logical and rational reasoning that created that force of change, to begin with, and to do so before most other collectors. So be a pioneer, not just a fast follower. I like cards so much because it’s a hybrid of psychology, sociology and good ole’ arithmetic –the “triple threat.” With that said, let’s first examine the reasons that caused the PMG to soar “like Mike.”

Unlike most cards at this time in the Junk Wax era, rarity was already built into the card, as it became one of the first serial numbered art pieces, today almost every set has scarcity built into their cards with parallels that go as exclusive as one of one. But these one of ones still don’t demand the price of a mid-range starter in a PMG numbered to 100. So what else was at play? For one, the word wasn’t fully out yet; the skybox metal sets were printed with so much abundance, that the chances any of us card collectors back in that day had ever come across one of these beautifully distinct cards. When word finally got out to the masses, demand crept in, and thus completed the formula of the scarcity of a card set many of us had collected in the ’90s but had no idea of these rare gems existence.

Now that everyone knows about serial numbers and built-in scarcity, are there still cards in this era that could become the next “PMG” or at least resemble the “PMG effect”? I’m glad you asked, here are three cards or card sets that can (potentially) become the next PMG:

Why it will: Another card with a beautiful design, that’s still subtle enough for some to overlook; and unlike most short print or super short print “SSP” cards of this day and age, there is not a serial number on these cards, though they appear to show up just as rarely as the “Cubic” version, which runs to just 50 prints. 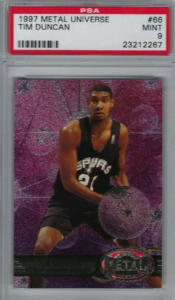 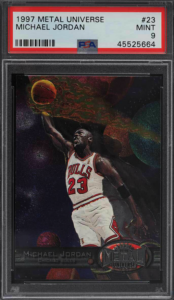 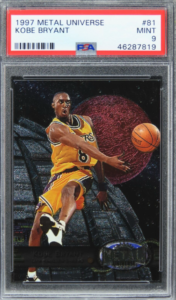 Why it won’t: The word is already out on these cards, and while you were able to scoop them up at a fraction of what they go for today, just two years ago, prices in recent years and months have skyrocketed to a point at which they may have already hit their peak. Even Panini has begun advertising the hype of these cards on the boxes themselves.

These two beautiful cards are from Panini’s flagship line, Panini Prizm and Prizm FOTL.. While there are no serial numbered cards on these, rumor has it (along with a little math), that the White Sparkle which sells for about $199 for a pack of 3, goes to a print run of 20.. The blue shimmer often gets overlooked by its serial numbered counterparts (green /25. Gold /10, black /1). Using the same research, it appears the Blue shimmers are printed to /35. Both of these cards have a shorter print run than the blue ice prizm or the orange prizm /50… Yet prices are often comparable if someone were able to put together an entire set of either of these cards, little doubt that it would inspire others and drive up the price.

Why it won’t: Prices of these two cards might be undervalued right now, but I see these two cards as having the least risk and the least upside of all other cards on this list. While these cards appear a bit harder than regular prizm cards, they still aren’t as difficult as most other lines, such as optic, which is gaining on prizm.

Similar to the Prizm Mojo, the Checkerboard has a very cool design of its name sake, a very low print run, however unlike the Mojo, the checkerboard is not numbered.

Once again, the math suggests a print run of either 20 or 23 depending on how you do the arithmetic, but it doesn’t seem as though its been increased over the years as the POP report looks about the same. This built-in rarity could help this card remain atop the Optic wishlists as long as it does not increase production like the rest of Prizm and Optic have.

Why I think it’s the next PMG:

No, we aren’t talking about Panini Prizm here, merely the early years of Panini Basketball! The only reason why this set is even relevant is because of a rookie by the name of Giannis. And while that card in PSA 10 has shot up from $100 to $600 in just the past 2 months, there is a little-known parallel card in these early Panini sets. The odds of getting one for any player is 1 in 7,500 packs, which makes this nonserial numbered card a unicorn of a pull, and POP reports also reflect this, as most players in this series have a POP 1 or 2, even some future HOF’s with a POP 0. Giannis’ rookie has a current POP of 4, with only one getting a PSA 10. But the real diamonds in the rough here appear to be the MVP caliber players like Lebron James, who has a POP 2, and POP 1 in Gold PSA 10. Lebron’s red knight doesn’t even appear on any pop reports, and neither does his black 1/1. My math shows that the gold knights were printed to /10 and the red knights to just /5. This is the case for both 2012-13 Panini and 2013-14. Other notable POP numbers for big-time players: Victor Oladipo (rookie card) has 0 POP in any parallel, the same goes for Tim Duncan and Anthony Davis. James Harden has 0 POP, with the exception of his 1/1 black knight. Kobe has a POP 1 Gold Knight. Basically, every player besides Giannis has a POP of 2 or less for the Gold or Red Knight.

Since this series is a bit older than the others, it’s easy for your casual collector to miss these hits, even I almost did. As I was opening a box looking for Giannis, I noticed that good ole Kris Humphries had a gold nameplate. It wasn’t until a few weeks later that I remembered and went back to look for Kim Kardashians ex.. When I found him, I did a google search and found out just how rare these were.. For any player, 1 in more than 7,000 packs.. That is the kind of rarity that makes the PMG’s for lesser-known players sell for four figures!

With two years of “Knights” to be found, such a low print run and an even lower POP, this series has the rarity, now can the demand for the rare Hall of Famers like Lebron and Kobe make these parallels scarce? If they do, watch out, because the Knights could be the next PMG.

Great article, Matt! I know many of us hunt these inserts, and every once and awhile need a reminder that they are rare. If you know a lot about inserts or have done some research, we would love to hear your thoughts!