Projecting prospects with 100% accuracy is impossible. There are injuries waiting to happen, slumps that never break, and other unforeseen events. The selection of players available is also refreshed every year. A new draft happens every June that brings heralded youngsters into the fray, and frequent international signings have become a staple.

Many “can’t miss prospects” will have bad seasons next year. Many “unknowns” will turn heads for a 50-plate appearance stretch. Future superstars and future “could have beens” are currently playing in the Arizona Fall League. There is so much talent that is constantly being replaced. How do we evaluate all this mess from a value-driven perspective, specifically investments in baseball cards? Fueled by a desire for making sense of investing in baseball cards and general curiosity, I have developed a model to help the common baseball card investor navigate this chaos.

Baseball hitters have historically been more projectable than pitchers. The potential for career-altering injuries to pitchers is exponentially higher. If we are playing the odds, then the population should be narrowed to hitters right off the bat. Players that have breakout seasons, usually early on in their career, are the ones that have their cards skyrocket. The major leaguers that can maintain that level of play become superstars, thus keeping their card value high throughout the duration of their career. I wanted to know what, if anything, these guys have in common.

My definition for superstars was simply: “the players who have captivated fans with their elite abilities in recent memory.” I included the likely rookies of the year in Pete Alonso and Yordan Álvarez since they graduated the minor leagues recently, which makes them more comparable to the current prospect field. A diverse sample was the goal and I came up with the following: Mike Trout, Mookie Betts, Aaron Judge, Christian Yelich, Ronald Acuña Jr., Yordan Álvarez, Pete Alonso, Bryce Harper, Manny Machado, Alex Bregman, José Altuve, J.D. Martinez, and Joey Votto. Yes, there are snubs. Yes, I forgot your favorite player. It is not an all-encompassing population by any means, but they were who I used for this initial study.

After the superstar evaluation, I used a sample of 92 prospects. The original reason for this study was to help my dad decide whether or not he should sell or hold certain prospect and rookie autographs that he owns. Thus, my prospect sample was born. I used the indicators I uncovered about the superstars to assess which prospects show promise.

Of course, I needed metrics to evaluate these studs, which led me to using FanGraphs. I utilized stats that capture overall offensive production because I consider defense, like home runs, to be a byproduct and not a reason for superstar success. In other words, superstars can definitely field well or hit home runs, but defense and home runs are not overall indicators of a superstar in my opinion. 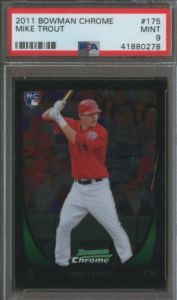 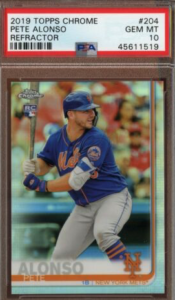 Here are the statistics I used in this study:

wOBA: Weighted on-base average, which measures the overall offensive value a hitter brings to the table. A batter can have many outcomes and wOBA weights them accordingly.
Average: 0.320. Excellent: 0.400.

wRC+: Standardized for park effects and the rate at which runs are scored in the modern day, weighted Runs Created plus is accepted as one of the best metrics at capturing offensive value. The various ways of reaching base are not equal and wRC+ uniquely credits hitters for each outcome they generate.
Average: 100. Excellent: 160.

All stats and context percentages were taken from FanGraphs. Please note WAR was not available for minor league stats and was excluded for that purpose.

The next step was to look at my thirteen superstars with an open mind. The goal was to find similarities across these players in their early years, focusing on their adventure through the minor leagues. FanGraphs lists all the stats associated with each minor and major league stint. It can be difficult to extract meaningful data from a player’s early years because they tend to bounce around different levels until their eventual major league entrenchment.

I established the following criteria for my sample size: using their first 400-600 professional games, pick the player’s two longest stints at a consistent minor league class and their first three major league seasons, if applicable. I would then assess if the minor league stint was long enough to provide anything meaningful. After going through that process, the minimum length of a minor league stint that fed into my results was 54 games, which was Ronald Acuña’s AAA stint before being called up for good. The average minor league stint I evaluated was 83 games and I only used one of these stretches for Bryce Harper and Alex Bregman, who did not have a second stint over 40 games.

A trend I noticed pretty quickly is that these players have been consistently above average throughout their professional career. Using wRC+, every player, except Manny Machado, who had a 96 wRC+ in 63 games, was always above 100 wRC+ in their longest minor league term(s). The other finding was that every player, except Manny Machado, had what I have defined as an “elite minor league stint.” The definition for such a stint is having two or more stats, of the six used, that were at or above the “Excellent” level per FanGraphs, detailed in the stat section above.

My first question was why Machado was so different from the others. I looked at his FanGraphs sheet and noticed that he has never had a stretch over 7 games that has resulted in a single “Excellent” rated stat. Not a single one. Is Manny Machado an elite hitter? Not by these metrics, but this is an example of an outlier that may support flashy defense adding value.

You may be thinking “so superstar players were always good, what’s the big deal?” An excellent question. When I looked at my 92 prospects, I did notice that several had already finished a lengthy minor league stint below 100 wRC+, which never occurred in my non-Machado superstar stints, and even Machado was only barely below 100. Some of these guys are highly touted but are not on the superstar track statistically. The hitter that has a single dud stint or has been trying to find his bat in AA makes him significantly more questionable. Of course, these prospects most certainly can become successful major leaguers, even superstars, but the evidence suggests the odds are not as good.

On the other hand, there are several prospects who fit this mold, but not all of them will pan out. My conclusion is that the current day superstars have played at an exceptional level throughout their entire professional career and have also shown flashes of brilliance on their journey to the majors.

So, what does this all mean for baseball cards, the topic at hand? There are so many investment opportunities out there. Many players at many levels on many teams show promise of being the next big thing. All 30 teams have the resources to invest in hundreds of players, but it is more applicable for us as individuals to narrow the scope. How can we decide who we should invest in other than “feel” and casting a wide net? Look at the current superstars. How did they get there? Consistent, above average play with showcases of their ceiling that culminated when they broke through to The Show and eventually changed the game of baseball as we know it. As I said in the beginning, it is impossible to be certain on prospects, but I hope this model can help you home in on who is on the verge of captivating millions.

I have added three current prospect examples that fit the model (a meaningful, elite minor league stint coupled with above average play by wRC+):

Additionally, here are three current prospect examples that are worth keeping an eye on (above average play by wRC+, pending a meaningful, elite stretch):

What do you think of my research, and what prospects are you thinking about? Leave a comment below.

Basketball Card Investing Strategy in the Year of Zion

AMAZING TRICK to Make $$ on Hall of Famers