There are several ways to invest in hockey cards: buying and selling old boxes or packs, focusing on very old cards, buying a particular team or player, investing in future hall of famers and more. For this article, I’m going to focus on investing in prospects and young players (25 years of age or younger).

But, first, here are some basics of hockey card investing:

Those are some of the factors that I consider when making an investment. There are more, but that’s a good start.

Now, let’s look at a potential investment in players on the Toronto Maple Leafs. I chose the Leafs because they are in a huge hockey market and have a wealth of young talent. I thought the Leafs were also good example of putting the above list to use — they tick a lot of boxes for a good investment.

What Leafs players are worth investing in?

The Toronto Maple Leafs have a load of talent on their team and that kills this Montreal Canadians fan to say, believe me, but it’s a fact. So who to buy? John Tavares was just named captain and is the model of consistent high output point production. You know if he’s healthy he will put up 80 points at least. He plays with Mitch Marner and either Kapanen or Johnsson who are great young talented linemates. He plays in one of the biggest markets in the league on the PP (power play to the uninitiated). He’s on a team that is one of the favorites to win the Cup this year. Check, check, check and check so far, right?

So is John Tavares a buy? In my opinion, no he is not. To me he does not have the “it” factor (he’s not super popular or charismatic) and most importantly he is too far along in his career to have much upside. At age 29, another 85 point year will not do much for his card prices. His card price bump is mostly behind him now. If the Leafs make a deep run in the playoffs he could see an increase, but not a big one, barring some huge goal to win the cup or performance of the ages in the playoffs. His card price will also likely not drop, though, so it’s not a terrible investment, but there are better options. 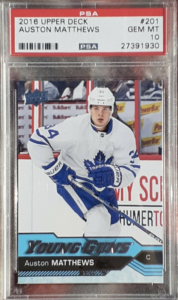 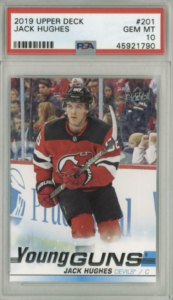 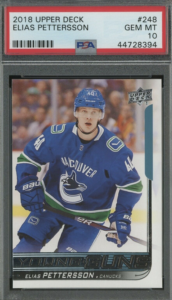 Nylander had a tough season last year. He missed several months due to holding out for a better contract. In the hockey crazy Toronto market he had heaps and heaps of pressure on him when he returned. His coach put on the pressure, the fans, the media and most of all himself. The rest of his season wasn’t the greatest and he under-performed. This is all great news for us! His prospects for a great year look lower than they should to the average fan not paying close attention.

All of that pressure due to his contract hold out last year has now switched to Mitch Marner who has a much bigger contract to live up to, leaving Nylander somewhat free to fly a bit more under the radar. Nylander also plays with Auston Matthews who is one of the best in the league and will help pull Nylander along in his wake as well, as he also posts a career high season (prediction #2) in 2019-20.

The fact that Toronto has two top lines also means that he’ll face lesser competition at times as the top opposition defenders will sometimes have to focus on Marner and Tavares. He gets PP time too, usually on the second unit, though we’ve seen him on the first unit as well. He’s a year older and wiser, and all reports were that he came to camp this year ready to go. His on ice performance has been excellent so far and he’s got several years of NHL experience now.

All of these factors combine to make Nylander a big buy and I expect him to have a career year.  His production, along with a flying Auston Matthews, will pump his prices. His PSA 10 RC is selling right now for $80 (Canadian) and I would not be surprised to see that increase by 50-100% by the end of their season. That’s when I’ll be selling or near it. If he were to get injured you can sit on the card for another year without losing anything, unless something crazy happens to the card market as a whole. Why not keep him long term? I think after a big bump this year his prices will flatten greatly. There may be some value holding him for a few years, but most of it will come this season.

Matthews is also set to have a career year for many of the same reasons. Toronto having two top lines leaves Matthews to face lower quality defenders at times. He plays the PP of course and he is set to explode production wise. Matthews’ play this year so far is what I expect from him all season. I think he’s matured and continues to work on his already stellar game. He’s entering his fourth season in the NHL, in that huge market where fans and media can’t get enough of him. He’s got the “it” factor. He’s got the talent. He’s got a team that could make a deep run. He’s in a huge market. He’s coming into his physical prime and most importantly he has not peaked yet!

I predict a 90-100 point season for Matthews if he stays healthy. If the Leafs make a deep run or win the Cup his prices will explode. Everything points to a career year for Auston Matthews, one of the most talented and popular players in the game.

Matthews RC PSA 10 YG base is selling for $290-$400 on ebay now and I expect that to keep climbing all year. This summer you could get them for $250. You can sell him at season’s end, the end of the playoff run, or you can keep him for years. He’s a great short and long term investment, in my opinion. Connor McDavid’s PSA 10  YG RC is selling for $600 right now, and I expect that Matthews will reach close to that number by the end of the season, if not pass it. If the Leafs manage to win The Cup or even get to the finals, expect the price to go much, much higher.

What about Mitch Marner and Morgan Riley?

Both great players but I think Marner may see a small dip in production this season or remain flat due to contract/media pressure. His card prices are relatively high compared to Nylander who has more upside right now. Marner had his big “bump” over the last few seasons. Could he rocket up again on the strength of a huge year and playoffs? Sure, but even if he does there won’t be the same upside as Nylander or Matthews.

Riley will be a Norris contender this season and we will see a bump in his prices as well which doesn’t make him a bad investment by any means. If you like investing in defensemen then he’s a solid choice that you’re very unlikely to lose money on. He is elite and unlikely to go backwards. Generally speaking there is less of an upside investing in defensemen which is why I have Nylander and Matthews ahead of him.

Kapanen is pretty cheap to pick up right now and his PSA 10 YG (young guns card) is about $40-$50. There aren’t many available because of the price point his card sells at. He has a lot of offensive potential and I also think he is a solid buy right now. He’ll get “top two” line minutes and play with the best in the league, more than likely. The only issue might be his coach Mike Babcock bumping him off those top lines to the third or fourth which we’ve seen before. Babcock wants his players to play how he wants and if they don’t, they’ll be dropped down.

Much like Kapanen, Andreas Johnsson will be on the first two lines more than likely this whole season. He’s a smart player with a lot of offensive upside. Another relatively safe, inexpensive investment that will go up this year if he stays on those top two lines. He may even be a better value than Kapanen as he doesn’t seem to have the up and down relationship with his coach that Kapanen does.

Hopefully this article gave those new to hockey card investing some good ideas to ponder. Let me know what you think in the Comments below.

Should You Invest in Basketball & Hockey Hall of Famers??