What an amazing time it is to be a sports card investor! The 2019-20 NBA season is finally upon us, affording us the chance to see where along the ‘Greg Oden to LeBron James Investment Spectrum’ Zion will land. And with the influx of NBA dynamic duo super teams, it’s only a matter of time before Batman and The Joker join the Gotham City Dark Nights (expansion team coming soon to a league near you) to win every championship from now until cloned Michael Jordan returns.

This point of this article is not to wax poetically about the monolithic demigods of the NBA, it’s to talk about The Little Astro That Could.

Jose Altuve. Standing in at a mere 5’6″, the days are long gone that anyone judged him based on his size. This Yoda-esque future Hall of Famer can stand toe-to-toe with the best hitters in the game. Had he not missed nearly a month of the 2019 season due to injury, he most likely would’ve tallied 40 HR. He’s well on pace to get 3000 career hits, and talk of him getting to 4000 or topping Pete Rose’s record, although extremely premature and highly unlikely, is not unwarranted.

When you add in his three (as of today) Batting Titles, 2017 American League MVP, and one (again, as of today) World Series title, it’s no wonder his rookie cards as some of the most collected in the hobby.

As I write this article, we are only days removed from Jose Altuve’s dramatic walk-off homerun, which sent the Houston Astros into the 2019 World Series.

Within minutes of this remarkable feat, Altuve’s PSA 10 base rookie card (2011 Topps Update #US132) skyrocketed in price. In the hours leading up to the homerun, the card could be purchased for $80 on eBay. Over a dozen such examples were available at this price.

As soon as the homerun ended the game/ALCS, all such priced copies were sold. Then all PSA 10s under $100 sold. I closely tracked all sales of the card over the next 12 hours. The following morning the card was selling for $130 in a PSA 10. That is an increase of more than 60% overnight.

The ROI on his PSA 9s base cards is even better. Prior to the homerun, PSA 9 Jose Altuve 2011 Topps Update RCs could be purchased for $20 or less, all day every day. As soon as he launched his moonshot blast, that supply vanished, and by morning the card was selling for $40-$50. It doubled in price overnight!

What caused such a hyperbolic rise in prices? The answer can be summed up with the following three words: shortsightedness, impulsivity, and excitement. When the three of these factors come together to form an NBA super team-like moment, card prices will always rise. Let’s delve into each. 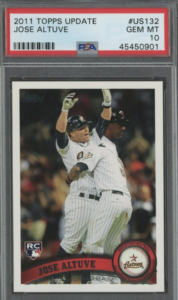 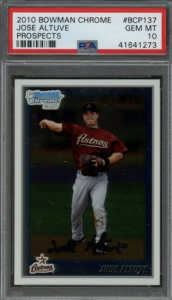 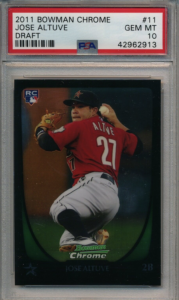 Jose Altuve has been a superstar for several years now. He hasn’t been under the radar since the start of the 2017 season. People/fans know all about him. They knew about him before his walk-off HR. They knew about him after. The same people who bought his PSA 10 cards for $130+ following the HR could’ve bought it for $80 just hours earlier. Had these buyers had the foresight to buy his card earlier, they could’ve saved themselves quite a bit of money. Luckily for sellers/investors they didn’t.

Impulsivity drives the economy. Go to any grocery store check out line and you can witness this firsthand. Does anybody actually need a thumb drive shaped like R2-D2 that costs double what a basic USB would cost? Yes, good God yes! I mean, no. Nobody *needs* such a thing. But, you saw the movie, you see the product, you think, ‘I want that’. And all economists know that ‘want’ often wins over ‘need’ when it comes to discretionary spending.

The same principle can be applied to the Altuve card price. I would assume that the majority of the people buying the card at these inflated prices are collectors, not investors. Collectors tend to allow ‘want’ to drive purchases. Investors utilize need. Not a judgement call. It is fun to both collect and to invest in this hobby. My point is that most of these $130+ purchases were made impulsively.

This is simple. The homerun was one of the most exciting sports moments I’ve witnessed in recent memory, and I’m not even an Astros fan. It’s easy to see why diehard fans of the team would be swept up with emotion and want the card.

The bigger question, one that is more long term and potentially financially beneficial to all investors, is where does the card price go from here? My guess is it will drop, but not as much as one may suspect. Keep an eye on the card price throughout the World Series. It will be an interesting case study for future purchases. I will write a follow up article about one month after the Series ends to revisit the card’s price trajectory. My guess is the card will be selling regularly for about $100-$110.

What do you think about Jose Altuve’s cards? What other baseball cards are you investing in? Let us know in the comments below.