Football card collector’s have graded almost 5,000,000 football cards with PSA. Every year, hundreds of thousands of more cards are sent in for grading. But not every year is treated the same by collectors. Some years more cards get graded than other years.

It’s possible to track the health and growth of the football card market by looking at the PSA grading data for trends by year, set, brand, and more.

This article visualizes 70+ years of football cards using the PSA football population data in various ways to better see the trends, changes, and growth over the years.

In 1955, Topps begins a 34 year dominance in the football card market. They were the most popular brand every single year and in most years 90+% of the cards graded came from Topps sets.

That streak was broken in 1989 with Score, which also coincided with the rookie years for Troy Aikmen and Barry Sanders, and a huge jump in total cards graded.

PSA data is a bit deceiving in 1999 and 2000. At first glance it looks like there was a huge spike in graded cards with Tom Brady’s rookie year. But Collector’s Edge released several sets with PSA pre-graded cards included. This greatly exaggerates the PSA population in those years (see chart below for these sets removed). 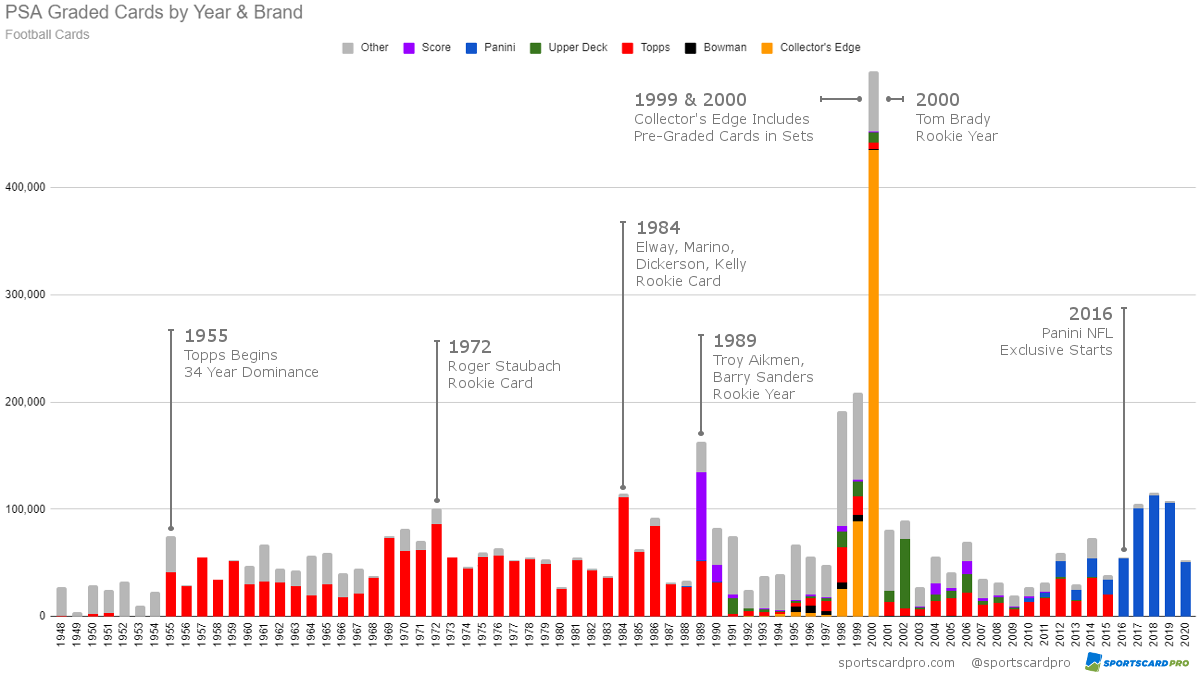 Football does have some spikes in card grading based on other player’s rookie cards but football is much more consistent than basketball.  Basketball has much bigger spikes and much deeper valleys, while football is fairly steady.

Since 2011, NFL card grading has increased 250%. This is impressive growth, but it pales in comparison to basketball’s 12,800% increase during the same time period. 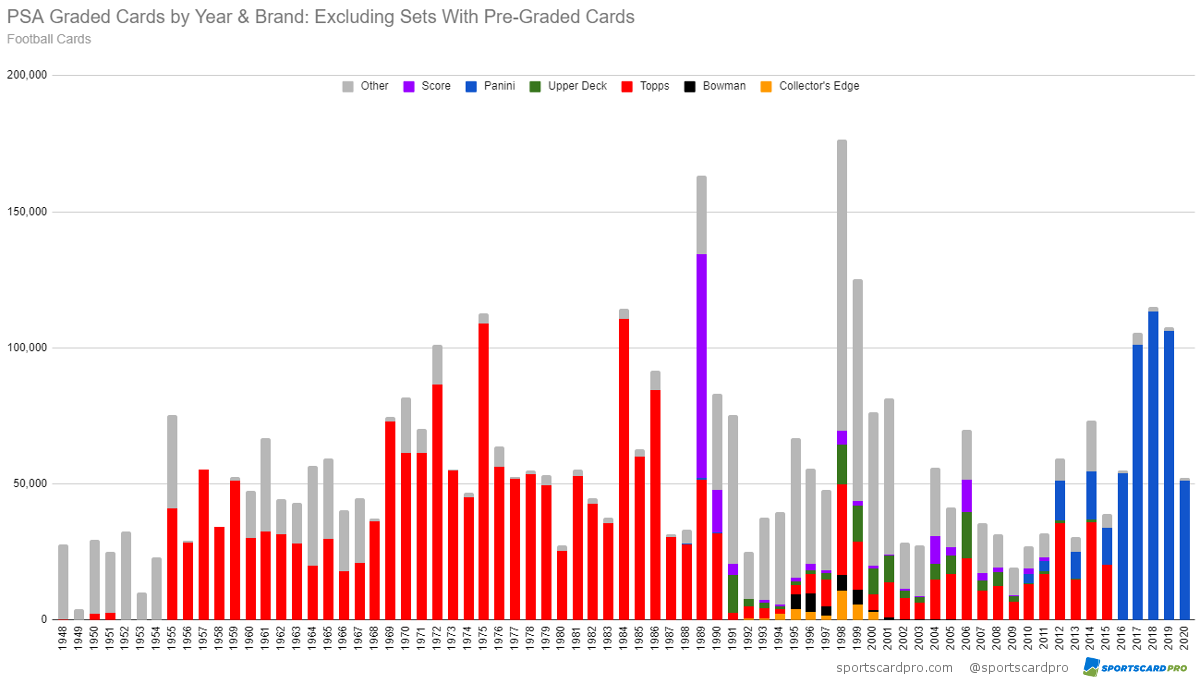 The grade distribution for football cards has changed a lot since 1948, as the chart below shows.

It is yet to be seen how this change in grade distribution will impact card values, but the top grades aren’t as rare as they once were. 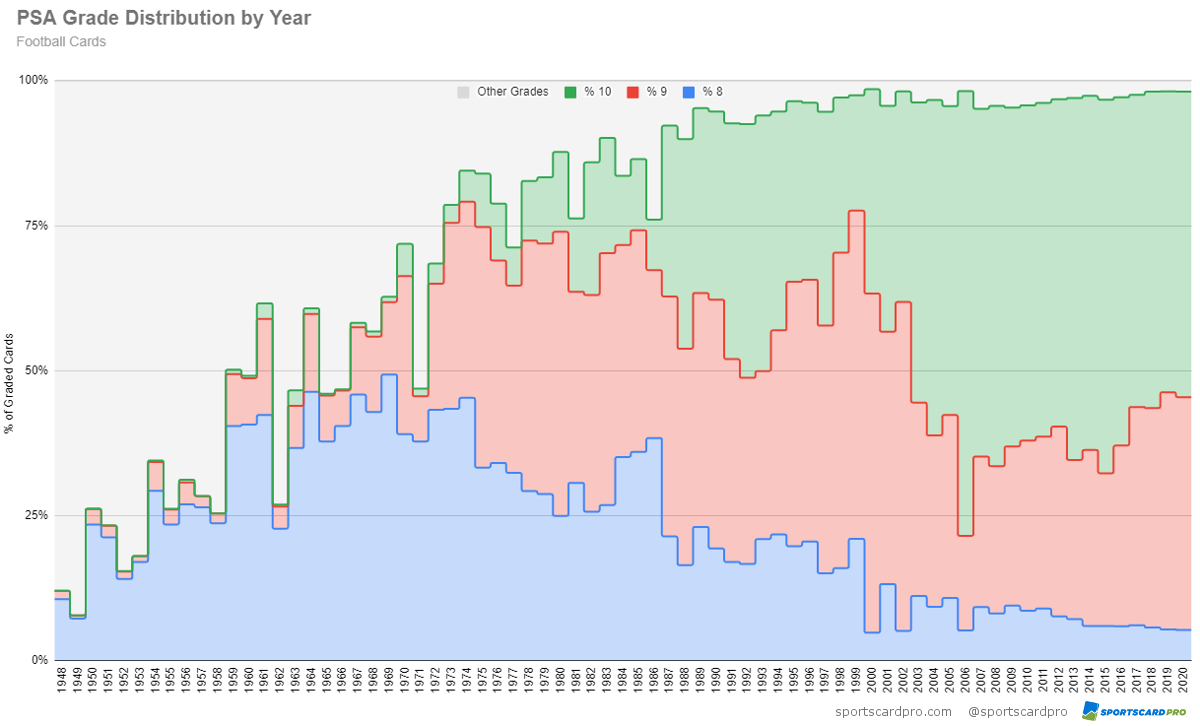 PSA grade distribution has shifted, but so have the total number of cards receiving the top grades.

The chart below shows the number of football cards receiving each grade each year.

All of the recent growth in graded football cards has been at grades 9 and 10. Grade 8 has been at the same level since 2002. 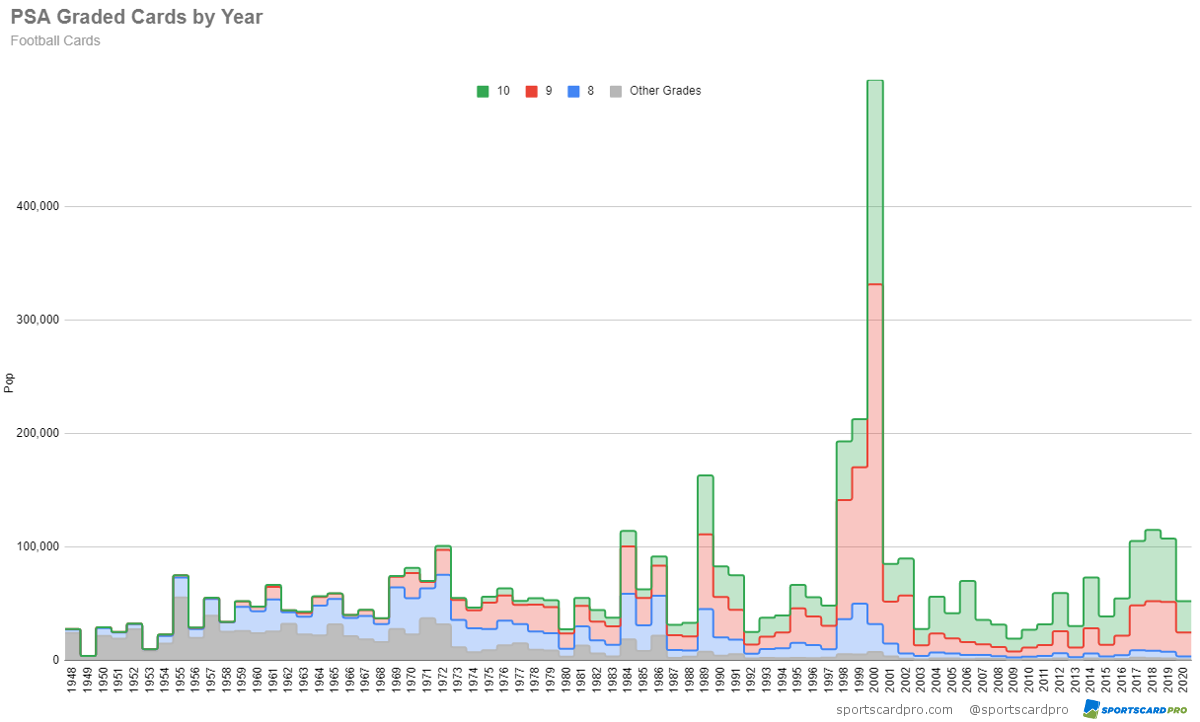 Topps Vs Panini Vs Collector’s Edge: Percentage Of Graded Cards By Year

This chart shows the market share for the three dominant brands – Topps, Panini, and Collector’s Edge – and how their market share has changed over the years.

In 2016, Panini became the exclusive card company for the NFL. Panini was growing in popularity before this but Topps was still the dominant brand. Exclusivity was a major coup for Panini because Topps lost a twelve year streak a-top the market after Panini and NFL made their deal. 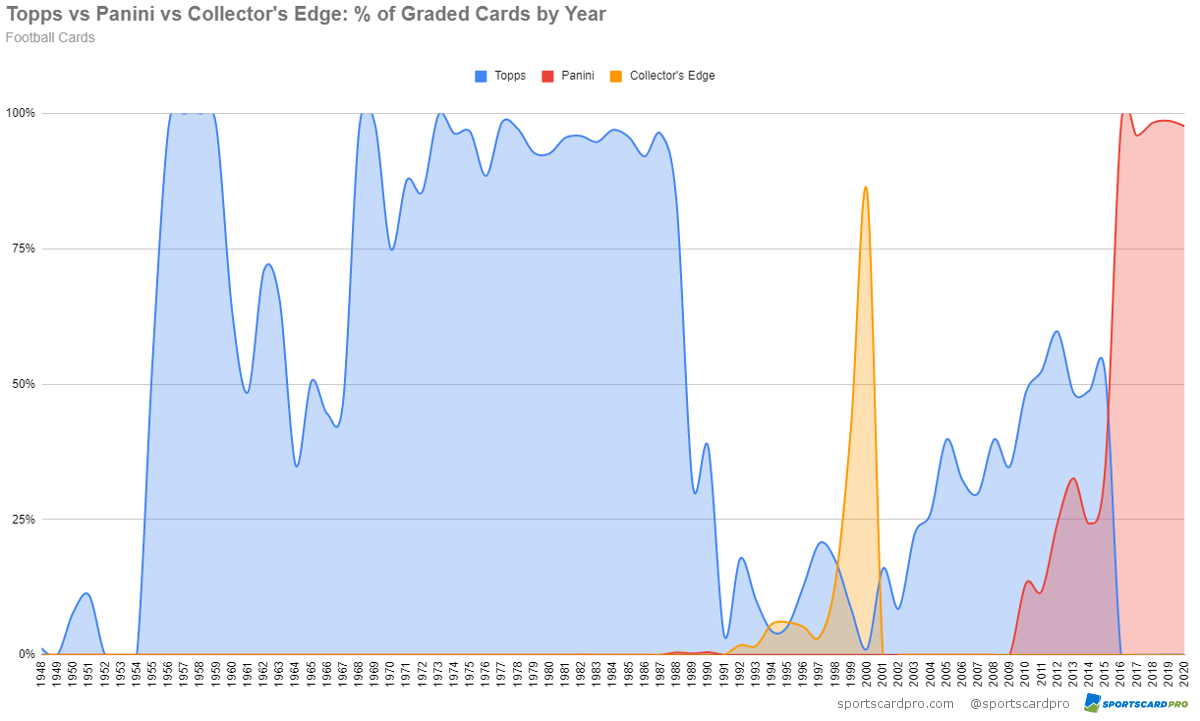 Number Of Football Sets Per Year Vs Total Population

Since the 1950’s, an average of 57,000 football cards have been graded each year. Some years are more and some are less, but it is remarkably consistent (ignoring 1999 and 2000). At the same time the number of sets has jumped considerably. 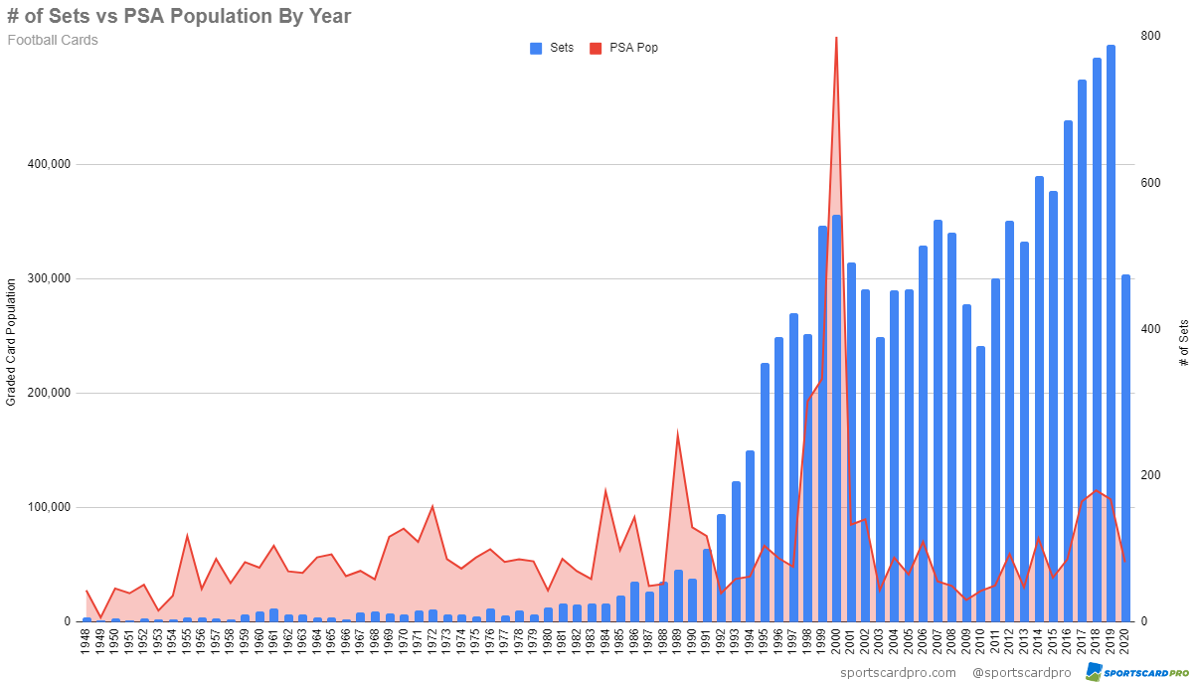 Most Graded Football Card Sets Of All Time

This infographic shows the 25 most graded football card sets. The sets with pre-graded cards are marked with an astrix.

Even with Panini’s exclusivity since 2016, only one Panini Prizm set breaks the top 25 (#25). The rest of the list is dominated by Topps base set. In fact, excluding the pre-graded sets, Topps holds every position except #25.

Most Graded Football Sets of All Time

This is a chronological list of the most graded football set per year.

Bowman had some early successes, but Topps is definitely the set that appears the most. Topps Chrome dominates from 2007 until 2016 when Panini takes over.

Most Graded Football Set Per Year

Editor’s comment: Great research on the growth of the NFL market. We appreciate our friends at SportscardPro.com and JJ for the hard work he puts in on these visual aids. We would love to hear your comments about the NFL market, especially now during the offseason. Where do you forecast the hobby/NFL market to be in six months?