As I was flipping channels today, there was a story on my local news about the skyrocketing sports card market! I initially thought we were going to hit a peak with pricing and came to the sudden realization that this is just the beginning. Mainstream attention is weaving its way to our hobby. During The Virtual 2020, Geoff spoke about how the industry may be headed towards a pop-culture blend, which will entice more influencers and celebrities to buy cards of their favorite athletes. I believe he is spot on. After all, I do not believe that Geoff has been wrong about many predictions for rising prices of cards. His picks are pretty spot-on. Why? Because he uses data as the main predictor. Although there is some guessing involved, the volume of buys along with numerical trends have created an opportunity to validate what is happening in this market.

I am not a paid shill when I say that Market Movers works. Shortly before Gary Vee posted about Devin Booker and others, I asked Geoff about why Booker was undervalued during the members only livestream. Geoff’s answer was that he played for the Suns. All of the data of other similar players pointed towards a discrepancy in Booker’s Prizm and Silver Prizm value. Based on sales volume and cross-comparisons, I knew Booker was going to go up. I had no idea that it would happen within days of my inquiry. Although many in the chat rooms believe the market is not sustainable, there are some tips on how to use Market Movers to add value to your collection along with three cards that may be destined to rise in value by the end of October. I encourage each reader to track these cards from 8/4/20 to 10/31/20 to check how the tool is helping me make wise and calculated investment decisions.

Population counts are only one piece of the puzzle. There are cards in which there is an abundance of high grades available and the market simply will ignore the anomalies. If I am buying Prizms, I will usually select the Base and Silver and compare the trends in Market Movers. If I see there is a limited amount of a highly-touted star or prospect, I will then research the card in detail. If the pop counts are truly low for a highly collectible card because of true scarcity and the value seems low, there is a likelihood the majority may not have caught on yet.

First, the Prizm Silvers in a PSA 10 are almost non-existent. Reviewing the Detailed Results tab in Market Movers allows the ability to view all sales in Ebay. The last Prizm Silver sold was in May for $800 with a current pop count of 13. The Prizm Base population count for PSA 10 is 787. There are currently only five base cards for sale as of today. With the current market, that is extremely rare for a popular player rookie card in a set that continues to increase in value. Unopened product is not abundantly available.

Some may believe that Baker Mayfield as a player is overhyped and is nowhere near the caliber of other quarterbacks who were rookies in the past three years. Although this may be somewhat true, the Browns may be a much better team with a new coach and healthy players. If Mayfield shows the potential he showed in his rookie year; this card may surpass the $1,000 mark by the end of November.

In the meantime, this card will continue to rise while the season is in full-swing. During the height of the pandemic, sports card investors realized the market was not dictated on actual play. When most realize that this card is very hard to come by in a PSA 10, it will definitely move higher than ever! If he plays 2x better than last year, this card may be a little pot of gold. 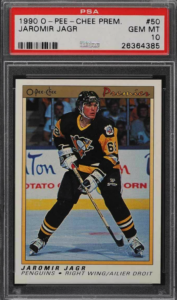 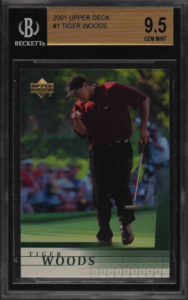 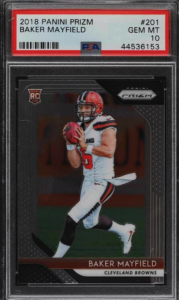 One noticeable difference over the past three months is the disparity between PSA 10 Gem Mint and BGS 9.5 Gem Mint. With an influx of new collectors/investors, it is easy to understand why a 10 seems better than a 9.5, although the words of the grade listed may be exactly the same. A 3X difference in value between a PSA 10 and BGS 9.5 is not so easy to understand. As many new collectors realize the difficulty in receiving a BGS 9.5 grade, this disparity will decrease and BGS 9.5 values will increase. There may also be a trend in requesting BGS graded cards without subgrades. Now is the time to invest in BGS 9.5 as there is great value in picking up a Gem Mint card of your favorite prospect/player for significantly less than a PSA 10 Gem Mint card. Using the Market Movers Tool allows to select and view each card by grade to compare values and trends.

Here is an example of a card with a high population count in which the value of this card will undoubtedly continue to increase. There are a select few of iconic relatively low-priced rookie cards which have shot up in value exponentially. For example, the 1989 Upper Deck Ken Griffey Jr and 1992 Upper Deck Shaquille O’Neil were easy to find at a low price until the recent boom. The Tiger Woods card itself has an iconic look along with featuring one of the most recognizable athletes on the planet! The Gem Mint 9.5 BGS Tiger Woods is selling for less than the price of a Bol Bol Prizm Base BGS 9.5. Bol Bol had a wonderful practice game. Tiger Woods has had arguably one of the best careers of any athlete. Once there is an awareness and appreciation of how undervalued the Tiger Woods rookie is, it will be hard to find at a price anywhere near the current value. There will also be a time in the near future that BGS 9.5 will rise to comparable value of PSA 10 and the gap between the two grades will not be as significant. At $106 for the BGS 9.5 Woods, it seems like a steal of a deal!

Basketball, Baseball, Football and Soccer cards have risen astronomically. One sport which is starting to gain traction is Hockey. The Price Movement by Player Tool allows for filtering by sport to get a true look at value trends in a 7-90 day window. I recently visited my local card shop and unopened boxes of Basketball, Baseball, Football and Soccer were reaching the same prices as high-end jewelry. The sport with some of the lowest prices in comparison was Hockey. There is still plenty of room to grow in the Hockey market and it shouldn’t be long until Hockey catches up. There is an international appeal and it seems inevitable for a significant rise. The average sale price of Hockey cards using the tool shows that cards of top rookies and stars are still accessible to a buyer who wants to collect and not have to shell out a mortgage payment to make an investment choice. By studying the percentage changes and $ of sales along with the other data provided, will allow making wise decisions about what to collect and what has the most potential to increase.

Jaromir Jagr’s name stood out as I searched the 90 Day price movement by player. He was the most established legend in the Top 5 with a very low-priced Rookie card. Jagr may not be “The Great One, but he is most likely the “The Great One Two.” His career has spanned over four decades and his accomplishments are endless. With a 66% change in value over the past 90 days, the value of this card is much lower than the potential. As far as Hockey goes, Jagr is the epitome of a great player. The card itself is clean and worthy to showcase with other premium superstars in Hockey and any other sport.

This was an interesting article on how one member uses the Market Mover tool to help make calculated, well-informed decisions with his collection. We know there are a million ways to use the MM tool and would love to hear some tricks you’ve discovered along the way.

Sports Cards From My Collection I’m SELLING Now and Why 👀