I want you to stop for a second and imagine taking a 70 pound bag of sand (or anything else for that matter) and throwing it on top of your back. You would think carrying this type of load for any amount of time would be pretty hard on your back, right? Well what if I told you that studies have shown that for the average person, carrying this type of load only requires 3% of your core musculature’s maximal contraction in order to stabilize the spine [1]. This is contrary to the myths that have been commonly spread through society that the spine is inherently unstable and prone to “wearing down” and weakening over time. Quite the opposite is true, actually. The spine has been shown time and time again to be exceptionally strong and robust, and is less fragile than you have likely been led to believe.

You’re probably wondering how this has anything to do with Michael Porter Jr.. The reason I’m bringing this up is because I feel like many sports card investors have already written him off as being “damaged goods” due to his previous back surgeries. I think it is a bit premature to write him off and think you should actually feel relatively confident in him right now from an injury risk standpoint. Let me tell you three reasons you should not be overly concerned about his back moving forward.

Without going super in depth into the anatomy of this injury, I want to talk about what was going on with MPJ’s back and the purpose of his two surgeries.. It has been reported that  at the end of his high school career, he was complaining of having hip/leg pain and saying his leg “felt dead.” These are common symptoms of a low back disc herniation.

Discs are the tissue that are layered between segments of your spine to absorb impact and resist compressive stresses in your back. You’ve probably heard these described as being like a “jelly donut” in that each disc is composed of a tougher outer layer that is filled with a “gel-like” inner fluid. A herniated disc occurs when a small tear in the outer layer allows for some of the “gel like” insides to spew out (Figure 1). This is important because there are nerves near to the disc that are responsible for sending signals both from the brain to the legs and back to the brain. Any pressure exerted from the disc fluid onto these nerves can interrupt this signal which would account for his “dead leg” symptoms.

The surgery he had to fix this problem, which is known as a microdiscectomy, is actually a minimally invasive back surgery despite the scary sounding name. They make a small incision in your back, and use tools to carefully pull out the parts of the disc that may be pushing on the surrounding nerve (Figure 2). Patients who undergo this surgery typically describe feeling almost immediate relief of a lot of their symptoms within 48 hours of the surgery. The rehabilitation process to get back to full strength and function often takes months, but the surgery in and of itself is relatively low risk and straight forward. There is often a negative stigma surrounding the invasiveness of back surgeries; however, this specific procedure is performed in an outpatient setting and is generally not one to be overly concerned about.

Looking back at the research, people who experience lumbar disc herniations have around a 5-15% reherniation rate after their initial injury. There have been multiple studies to show that this generally holds true for high level athletes as well [2]. Compared to other injuries, this is definitely a low number and is indicative of the fact that the outcomes of this particular surgery are typically very successful.  It is certainly not out of the question that this could be an injury that happens again, but the worst case scenario is that he undergoes another surgery to repair it. The nature of this injury is such that once the problem is fixed, continued symptoms are not very likely. While it would not be ideal, a similar injury occurring in the future would not necessarily be a long term career damaging/ending issue. 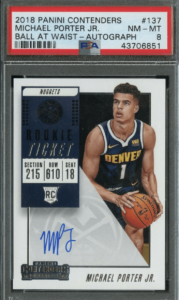 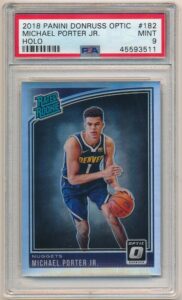 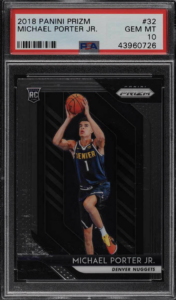 Michael Porter Jr. is far from the first NBA player to have this injury or undergo this surgery. In fact, a study done in 2016 looked at 61 other NBA players who have experienced the injury to determine the effects of it on their career trajectory [3]. The study divided players with the injury into two categories: those who underwent surgery, and those who treated the injury conservatively. The data points to there being both an initial drop off in performance (PER) as well as fewer games played in the first postoperative season for those who underwent the surgery when compared to those who elected not to have it. However, during the second post-operative year and beyond, these players showed no difference in the same metrics when compared with those who chose not to operate. In other words, these two groups both generally returned to form and did not have significant drops in their career length following the injury.

Although you could argue that 61 players is a rather small sample size, there is enough data to at least suggest that there is a good chance that Michael Porter Jr. takes a step forward now that his back has had plenty of time to heal and build strength. I imagine he has received excellent treatment from the Denver Nuggets medical staff and feel like the organization as a whole has done a good job in gradually easing him back towards having more playing time. In the limited time we have seen him back, he has shown flashes of what he is capable of with multiple double-doubles and 20 point games. I think what we are seeing is the result of him being further out from his surgery and becoming comfortable again out on the court. I envision this trend continuing as the season resumes.

As you’ve probably heard time and time again, in the sports card world you can often benefit from “going left when others go right” so to speak. I feel strongly that this could potentially be one of those instances. It’s not like MPJ is a player that is flying under the radar, but I imagine that there are a number of investors who are avoiding him for fear of re-injury. For that reason, if he can string together consecutive seasons of good health while flourishing as a top scorer we know he can be, there is a lot of room for growth in his card values. Without the injury risk, he was a clear-cut top 3 pick in his draft class and it is easy to see why. His ceiling is incredibly high and I feel like the circumstances of this injury and surgery combined with past research outcomes should mitigate some of the fear of him being a high injury risk. At the very least, he is an intriguing short-term flip candidate if he makes some noise in the playoffs. I am giving his situation a green light and feel fairly confident in both his immediate and long term future outlook from an injury perspective.

Does the risk of injury or an injury-prone player impact the way you invest? Does it affect when you buy or sell that player? We would love to hear from you and about your collecting experiences.