MLB Offseason, also known as Buying Season for Card Investors, is upon us and it’s time to do some research on who are the best investments for the upcoming seasons.

I created a spreadsheet looking at a few stats that are important to me (Team, Age, WAR, HR, PSA 10 RC Pop Report, and PSA 10 RC Sold Comps). I picked out who I believe are the top three to five players on each stat and began doing some research.  The three players I found right now that are bargains in my opinion and have huge potential return on investment are Francisco Lindor, Cody Bellinger, and Mike Trout.

Francisco Lindor is the top guy on my list.  He could arguably #1 on this list for multiple reasons.  At the age of 25, he has 130 HR’s and a 28.6 WAR (Wins Above Replacement).  Those are really impressive numbers. I figured there would be a high population of his 2015 Topps Update RC PSA 10.  I was wrong. There are only 491 in existence and can be had for roughly $40 right now.

He is a great long term investment because I think he is changing the way teams are viewing shortstop, but I think he is a great short term investment as well because his contract is expiring soon.  There are a lot of rumors of him being traded in the offseason, with a potential destination of the Los Angeles Dodgers (could be a big impact for my #2 guy on this list) which would be a much bigger market than Cleveland.

His cards have always seemed to fly under the radar because of bigger names, bigger markets, and big rookies, but all he has done is become a 4 Time All Star, won 2 Silver Slugger Awards, won a Gold Glove, and won a Platinum Glove.  He is completely undervalued in my opinion, and even if he doesn’t end up in a big market, he is a no – brainer for me as my #1 best investment this off-season.

Cody Bellinger is the next one that stood out to me.  We all know how good he is, but the thing that amazed me about his 2017 Topps Update RC PSA 10 is that they are only about $50.  The Population Report for him is over 1,000 which may seem high, but compared to other superstars this is still relatively low.

He has hit 111 HR’s by the age of 24, and his WAR is 17.4.  He is an MVP candidate this year, and barring injury will be for many more years. Here is why I like him as an investment though. He is a future Hall of Famer in my opinion, and at some point the Dodgers have to win a World Series with all their talent, right? If and when they do, his cards will skyrocket in my opinion.

I can see a gradual rise in his cards over the course of his career and is a great long term investment in my opinion. I don’t think you can go wrong investing in Cody Bellinger.

Mike Trout is my #3 choice.  To me, anytime you mention investing in baseball cards Mike Trout has to be in the conversation.  He is passing Hall of Famers routinely in Wins Above Replacement, and sitting at 72.5 currently, at just 28 years of age.  Mickey Mantle’s career WAR is 110.3 if anyone is interested. 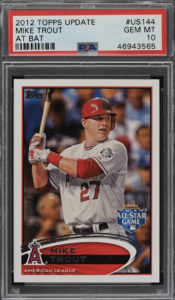 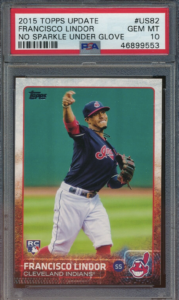 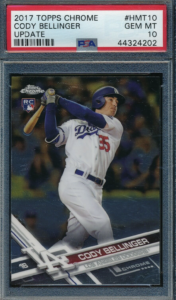 Aside from statistics, one of the major reasons why I think it’s a great time to invest in Trout is because the Angels just hired Joe Maddon as their manager.  He has won everywhere he’s been (Tampa Bay and Chicago). Throw in the fact Shohei Ohtani will be a year removed from Tommy John surgery, and the possibility of the Angels signing a big free agent or two (Gerrit Cole?), the Angels could be making some noise in the near future. That’s the one area lacking in Mike Trout’s career, is playoff appearances and success.

Mike Trout’s card won’t increase in value because of a new contract, he just received one last season.  They will increase because he is a once in a generation type player. If his career ended today, he would be in the Hall of Fame. He’s only 28 years old. If the opportunity presents itself, invest in his 2011 Topps Update Rookie Card. You won’t be disappointed.

What do you think of investing in Francisco Lindor, Cody Bellinger, and Mike Trout? Who else are you investing in this offseason? Leave your thoughts in the Comments below.

The EPIC Rise of Optic Holo – and What Set is Next?