Like many of you, I became obsessed with sports card collecting in the late 1980s. I’ll never forget the thrill of riding my bike to the corner drug store, buying packs of wax and ripping them open in the parking lot. I was always on the hunt for the Upper Deck Ken Griffey Jr. Rookie Card — and despite buying a hundred or more packs, the chase would end up fruitless for me.

Baseball card trading was how I learned some of the basics of the investing world — buy low, project future value, sell high. I made some really stupid trades along the way (giving up my gem mint “Bo Knows” card for a beat up mid-career Hank Aaron card will always haunt me). But through those trades, good and bad, I learned a lot about entrepreneurship.

As with most of America, I lost interest in card collecting around 1992. My mom shoved my cards in big cardboard boxes, where they’d sit and gather dust for the next 25 years. I never gave the cards much thought, until a year ago, when my oldest son came home from a visit with grandma with some packs of 2018 Score Football Cards. “Wow, they still make these?,” I thought to myself.

Opening those packs with my son reminded me of the fun I had as a kid collecting. As I looked closely at the cards, I realized how much better produced they were today than when I was a child. Soon after, I found the card isle at a local Target, and decided to buy some other brands (what were all these new brands I had never heard of?). As soon as I opened packs of Prizm and Donruss Optic, and pulled an auto and some parallels, I realized how much better — and more addicting — the hobby was today. Then I discovered online card breaks, and high-end sets like National Treasures and Flawless, and suddenly, once again, I was hooked.

This time, though, I’m looking at the hobby through a different lens. In addition to being a ton of fun, I believe card collecting is a great investment right now. I believe we’re in the early stages of another golden age of the hobby. And I believe savvy investors who take a data-driven approach to collecting will make a lot of profit in the years ahead.

Over the next year, I’ll be investing a considerable amount of my own money into cards. I created this blog (and YouTube series and Podcast) to document my journey and share the opportunities I see.

If you’re not convinced that sports cards are a good investment right now, here are some of the reasons why I believe they are:

Card Manufacturers Have Built Scarcity Into their Products

The reason why your cards from the late 80s and early 90s aren’t worth much is because the card companies overprinted them like crazy. When demand for cards increased during that time, so did supply. And why not? The card companies saw it as easy money. But when supply increased to ridiculous levels and demand started to wane, the bottom fell out of the market.

Today, we’re somewhat protected against that scenario, especially with higher-end cards. The introduction of serial numbered cards has built scarcity into card issues, guaranteeing that print runs (at least of those cards) are limited. Scarcity, in any form of investing, is key to price appreciation, and the same holds true here. For some card brands, such as National Treasures, Flawless and Immaculate, every card is serial numbered. While they are very expensive to buy, I believe key cards in those sets stand the best chance to increase in value because they are protected from overprinting.

When I was collecting as a kid, card grading wasn’t a thing. Then PSA and Beckett’s BGS came along and changed the hobby forever. Grading ensures the quality of cards being traded, making it much easier to safely make purchases through eBay and other online sources. Also, grading itself adds scarcity, because it’s difficult to get a PSA 10 or BGS 9.5 graded card. PSA and BGS disclose how many cards they grade at each level, giving everyone an understanding of the total population size (especially for older cards, where it can be expected that most excellent condition cards have been graded by now). Even an overprinted card may be super rare in a gem mint form. 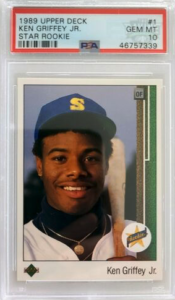 For most cards, autographs add value. Collectors like to chase key autographed cards in every new release. For the investor, collecting autographed cards also ensures a degree of scarcity and future price appreciation. Reason being, players, especially well established ones, are only going to sign a limited number of autographs per year, so their signed cards will always be somewhat rare.

When card companies can’t get enough autographs to keep up with demand, they’ll widen the checklist – meaning, they’ll have lesser players autograph cards just so they can claim a certain number of autographs in every card box. This won’t affect you if you’re buying key players on the secondary market, but if you’re buying boxes and ripping them open hoping to find a star autograph, they will become tougher to find as demand and print runs increase.

It’s a Liquid Market Now (You Can Actually Sell Your Cards!)

When I was collecting as a kid, Beckett was the holy bible of card prices. I remember excitedly checking my new issue each month to see which of my cards had increased in value, and by how much.

But, really, back then all Beckett did was give us a comparison value to our friends’ cards for trading purposes. If you actually wanted to sell your cards, options were limited, and you certainly weren’t going to get anywhere close to what the Beckett guide claimed your cards were worth.

Today it’s a very different story. Thanks to eBay, COMC.com and other online marketplaces and auction houses, it’s actually easy to sell your cards. This has completely changed the game for those looking to invest in sports cards. It’s now possible to put money into the market, see price appreciation, and then cash out and enjoy your profits.

Fantasy football, and more recently daily fantasy sports, is a huge industry. And why not? It’s a lot of fun getting to play general manager and setting your dream lineup in hopes to win some money.

Guess what else allows you to play general manager and set a dream lineup? Sports card investing. And instead of just seeing your lineup on a computer screen, you actually get to hold the cards, show your friends and enjoy the cool autographs and memorabilia they contain. And, collecting cards give you a lot better chance of ending the season with a winning profit (that is, if you read this blog and make wise investment choices!).

Oh boy. Zion is coming. And he’s going to change everything.

Never in the history of sports has any new player been as hyped entering their league as Zion Williamson. You could argue that Lebron had massive hype when he started, but that was before the age of social media and he didn’t spend a year in college capturing the nation’s attention. Zion’s hype train is running even stronger.

What does this mean? Basketball card collecting is about to blow up this Fall and Winter.

What should this mean for you? Invest now and make money on the appreciation.

Zion Aside, the NBA is Really, Really Interesting Now

Kawhi and Paul George in LA? Competing against Lebron and Anthony Davis on that other LA team?

Sports betting is starting to sweep the nation. Did you know that in May, 2019, for the first time in history, more money was bet legally in New Jersey than Nevada? Other states are seeing that success, and it won’t be long until sports betting is legalized throughout the nation.

With that will come a new wave of sports bettors. And they’re all about to learn a hard lesson – it’s really hard to make money betting on sports. The sports betting market is very efficient. There is so much attention paid to it and so much money being bet that point spreads are often right on point and are frequently hard to beat.

You know what’s not nearly as efficient of a market? Sports cards. Not as many people are paying attention, and there are a lot of people in the market who aren’t very sophisticated about when or who they buy and sell. That means opportunity is abound for a savvy investor.

When Past Collectors Rediscover the Hobby, They’ll Love It

Everyone and their brother collected cards in the 80s and 90s. It was fun. People loved it. Most of those people have forgotten about the hobby, much as I had, until I was recently reintroduced to it by my son. Then I became hooked again.

My story is not unique, and every day collectors from the past are rediscovering the hobby. When they do, I think most of them will love it again, just as they did when they were a kid. The number of card collectors has already been steadily increasing the past few years, and I expect that to accelerate in the months and years ahead. More people in the market means more demand which means prices will increase.

Finally, Sports Cards are Even More Fun to Collect Now!

Have you seen how awesome cards are today? Good god, look at these things:

Wow. Who wouldn’t want to collect those?

Now, with all of that said, it’s important to understand that sports card investing (and investing in collectibles in general) is a very risky form of investing. It’s based on the speculation that interest in sports cards will continue to grow and the sports card market will continue to rise. While I think this will happen in the near-term, market conditions could quickly change. For example, if the stock market or job market turns south, discretionary spending could dip, and sports cards could see a large drop in interest and prices. So, invest carefully and know the risks involved.

Ready to take your sports card investing to the next level? Join our Membership Program now for card recommendations, advanced analytics, premium community access and much more!