Predicting rookie quarterback success in the NFL is near impossible task. There is no such thing as a sure-fire-can’t-miss pick in the NFL Draft; in fact, you’re as likely to get a Ryan Leaf as you are a Peyton Manning. Even the best NFL general managers have done a consistently poor job of picking quarterbacks over the years.

For a football card investor, this makes it really difficult to know which rookie quarterback cards to invest in. It’s impossible to predict whose cards will go up like Patrick Mahomes rookie cards have. Since I don’t like to make sports card investments without strong data backing up my decisions, I have generally shied away from buying many rookie quarterback cards.

FiveThirtyEight looked at a multitude of college statistics from all quarterbacks drafted since 2011, and determined which statistics translated the most to NFL performance. Here are the statistics they found that matter most:

FiveThirtyEight then weighted those statistics, did some manipulation to the formula to adjust for the quarterback’s conference and the competition they faced, and generated a resulting success probability percentage for each new quarterback.

Their algorithm is definitely not perfect. For example, it predicted Johnny Manziel would be an NFL star. But, it’s more accurate than most NFL general managers are at picking quarterbacks, and it’s certainly more accurate than I would be guessing which rookie cards to buy.

So who does the model favor in this year’s rookie quarterback class? You might be surprised: 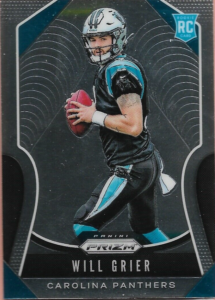 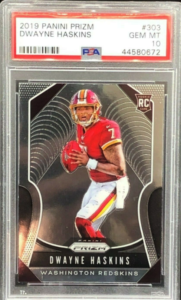 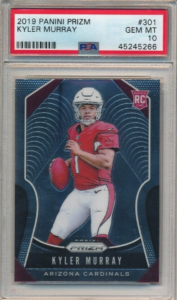 After seeing this data, my first thought was, how can I use this data to find the most value in this year’s quarterback rookie cards? So I took the current prices of rookie cards for the five quarterbacks that the FiveThirtyEight model predicted have a 50% or greater probability of NFL success, and then adjusted those prices by their success probability to determine the best investment value:

In order to determine my value ratings in the chart above, I started by assuming I had $1,000 to invest in one of these quarterbacks. I then multiplied that amount by the percentage of quarterback’s NFL success probability (per FiveThirtyEight’s data) to adjust for the risk I was taking on each quarterback. Then, I divided that amount by the average eBay sale price of Contenders Draft Picks College Ticket Auto cards (not numbered) of the player. This game be a value rating, which is essentially the number of cards I could afford to buy of that player, adjusting for their likelihood of NFL success.

The result is clear: while Kyler Murray has the best probability for NFL success, his card prices are overly inflated compared to his peers and he likely doesn’t make a good investment. Will Grier has close to the same chance of NFL success (97% for Murray vs 90% for Grier), but his average card price is more than four times less, making Grier a much better investment.

If you’re looking for real value, look to Ryan Finley and Jordan Ta’amu, who both have extremely low card prices and are receiving almost no media attention, but have high probabilities of NFL success according to FiveThirtyEight.

Note that these ratings are for their career, not for their rookie year. It’s entirely possible that Kyler Murray and Dwayne Haskins could have the best rookie years, because they’ll likely play more than most of the other rookie quarterbacks. If you are looking to buy cards and flip them within a year, this data won’t help you. If you are looking to invest in cards and hold them for at least a few years while a player’s career progresses, this data will hopefully prove very helpful.

Here’s how I’m going to use this data: I’m going to buy a bunch of Will Grier cards, and I’ll also buy some Ryan Finley and Jordan Ta’amu cards (if he gets signed), because if either pan out they’ll be a tremendous value investment. Then, I’ll hold all the cards for at least a few years to give these quarterbacks a chance to blossom, and if they do, I’ll sell while they’re in the upswing of their career.

What do you think? Which rookie quarterbacks are you buying? Leave your thoughts in the comments below.