Okay, there are a lot of directions this article can go. But let’s discover some of the background of what actually happened with the explosion of Bol Bol cards and how this is actually a good sign when it comes to basketball sports cards.

Bol Bol, against the Washington Wizards, scored a whopping 16 points, 10 rebounds, & 6 blocks in the NBA Finals Game 7. He drove the Denver Nuggets to their first-ever TITLE. He may go down as the best big man of all time.

Kidding!!! Did Bol Bol have a good game? Yes. But it was a preseason game. We are talking about a preseason game!Bol Bol’s one-game performance showed an increase in his Prizm Rookie from $20 to $124.47 and it is continuing to climb. Bol Bol was recently highlighted in the Sports Card Investor Flip of the Week.

The hype is completely centered around one big game. Jonathan Isaac just had a nice game for the Orlando Magic and people are already talking about him. Therefore, his cards are beginning to increase in value. A lot of the sports card market is about HYPE. If a player starts to garner some Hype, then their card value begins to increase.

Which brings to my main talking point: Big Men are a GREAT value pick, but do your research. Bol Bol goes to show that there is at least a little bit of interest in big men. 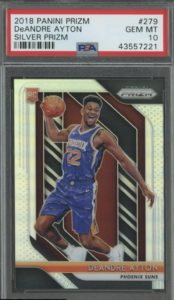 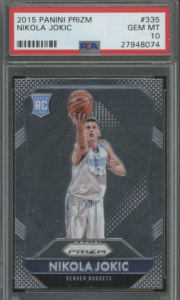 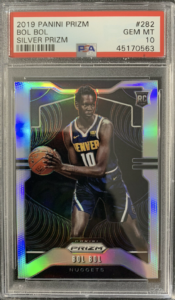 Big Men Are Worth A Look

If you take a look at the sports card market, most of the big time players in basketball cards are guards or forwards (Giannis, Lebron, Doncic, etc.).

But why can’t a big man get any love? Some would argue it’s because they aren’t the focal point of an NBA team, because our new league is filled with shooters. Look how Curry, KD, and Thompson redefined shooting from the 3-Point line OR how Steve Nash & the Phoenix Suns in 2006 had a fast-pace offense that propelled them to being a great team. The NBA right NOW is fast, so big men seem to be lost.

Would you rather build a team around a star center or a star guard? I would argue a star guard, but I think there are big men out there that can greatly help a team. Look at Joel Embiid or Anthony Davis or Deandre Ayton. Big men can still play a large role, the NBA NEEDS big men.

Why is it that a Shai card is worth 3x the amount as a Deandre Ayton? I believe both players still have a lot to prove, but I also believe that both players are going to make a big impact in the NBA. Remember that Ayton was a 1st overall pick.

Now, if you take a look at how GROSSLY undervalued some of the best Centers in the league are, I think you can load up on a couple. There is going to be a time where Guards are simply too expensive, so people will turn their attention towards big men that can truly play.

Take a look at Anthony Davis’s base prizm card:

You’re telling me that Deandre Ayton can’t be half as good as Anthony Davis? I believe he can, which is why I think he is a great investment right, especially for someone interested in exploring more than just guards. Anthony Davis is going to be the front runner when it comes to big men’s card values increasing.

Big men are so grossly underpriced right now & it’s definitely worth at LEAST a look.

Excellent points raised regarding “big men” across the league. Do you agree and think they are extremely undervalued or are shooters and ball handlers the only way to go. We would love to hear your thought and comments regarding the article.

Will the Sports Card Market Keep GOING UP? Interview with THE GOAT Dr. James Beckett