Since its inception in 2012-13, this set has grown into the standard for collecting recent basketball rookies and rainbows. But as I opened a box of 2017-18 Prizm Fast Break over the weekend, I wondered what many others have in recent years: how many of these base and parallel rookies are there? We know that rookie silver prizms are a popular, valuable target, but is that a product of low supply or high demand—or both?

As I have been diving deep into my collection over the last two months, I decided it would be worthwhile to research the different formats of 2017-18 Prizm Basketball and calculate the approximate print run of the base cards and their parallels. While the analysis of this year is not informative of the Prizm card population for other seasons, it does give a good indication of scarcity for rookie cards of younger all-stars, such as Jayson Tatum, Donovan Mitchell, and Bam Adebayo, as well as cards of popular superstars, like LeBron and Giannis.

After hours of watching videos and doing math for fun, my findings are below. Keep in mind that the shorter print the numbered card is, the less likely the calculation is to be accurate with a small sample size. For that reason, take my estimates of retail products (which have few serial-numbered cards) with a grain of salt, but they will put us in the ballpark. And this process can be duplicated with many other sets if you have the time and desire.

Let’s begin with hobby boxes, as this format is well-recognized among modern collectors. Important information to remember for 2017-18 Prizm Hobby Boxes:

-In First Off the Line (FOTL) boxes, you receive 2 red shimmer parallels, both numbered to 8.

Other base prizm colors found in hobby boxes include:

By watching a case break, thanks to a video posted by Cardsmith Breaks, I counted the occurrences of each color of base card in one of their 12-box cases. 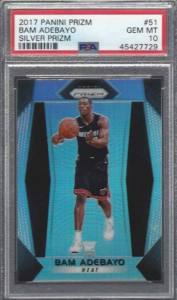 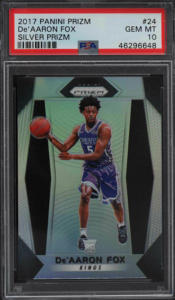 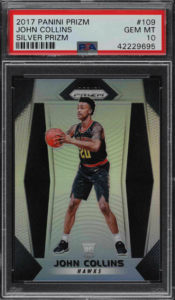 Every box in the case had six silvers, plus four packs with both a hyper and ruby wave. Each box also had four to six numbered base parallels, but if you removed the mojo and gold parallels, no box had more than five numbered cards. It seems likely the parallels below orange are not consistent from case-to-case, so I do not believe this is a large enough sample from which to calculate overall print run from those short prints.

However, using the frequency of other numbered cards, we should be able to calculate how many cases. Our formula:

For example, we could add together the three most common numbered Prizm cards found in a hobby box (blue, blue ice, and purple), and discover there should be 373 total of these serial-numbered parallels for each base card. With a 300 card base set, that brings us to a total of 111,900 blue, blue ice, or purple Prizm cards in existence.

If these higher-numbered parallels cards occur at a frequency of 48 per case as detailed in the table above, there should be about 2,331 hobby cases of Prizm basketball (including First Off the Line, as they include about the same number of prizms but with the addition of the red shimmers).

Other groupings can be used to calculate this as well. Based on just the blue parallels, there are 2,296 cases.

For today, we will go with 2,330 cases, since that seems around the most likely number based on my initial calculation using the most frequent numbered parallels. That would translate to:

Already we see silver prizms are far more rare than the base cards, but we begin to see a trend that other unnumbered parallels (hyper and ruby wave) are even less common.

Now that we have gone over the process in detail, we can speed through the different retail formats available in 2017-18:

-Multi-pack boxes (12 cello packs with 3 inner packs of 4 cards each and a 3-card red-white-blue pack for a total of 15 cards in each cello pack; 20 boxes in each case)

Each of these three formats includes a numbered pulsar parallel (pink pulsar to 42 in retail, green pulsar to 25 in blasters, red pulsar to 25 in multi-packs), along with retail-only green prizms and silver prizms. The 24-pack retail boxes also include ruby wave prizms (like hobby) and the multi-pack boxes contain the red white blue prizms.

Using the formula from earlier with serial numbered cards found in hobby boxes, we can get an idea of how many cases were produced of these retail formats.

Remember that the shorter print your numbered card is, the less likely it is to be accurate with a small sample size. These three formats were much harder to estimate than the hobby boxes.

For the 24-pack retail boxes, I adjusted the pink pulsar frequency to 10 per case, meaning there are now 1,260 cases containing 120 silvers, 80 greens, and 60 ruby waves each.

7,500 cases of blasters would translate to 1,000 silvers of each card in that product alone, almost twice the number found in hobby boxes. In the case I saw opened, there were also two Sensational Signatures pulled, which are the only autographs available in the blasters. If each of the 7,500 cases had two autographs, that would mean 1,500 of each Sensational Swatch card in the checklist and all ten of the rookies had approximately 1,500 Sensational Signatures. Those numbers seem unrealistic at first glance, so I believe 3,750 cases with an average of 2 green pulsars per case could be closer to accurate (meaning there are 750 Sensational Swatches for each player in that set and each rookie has 750 autographs; still high, but appears more plausible).

For that reason, we will use 3,750 cases to calculate the population of silvers, greens, and base found in blasters.

With the multi-pack cases, you are guaranteed 720 red-white-blue prizms because there are 20 boxes with 15 cellos. If the break is an accurate ratio of silver base to green base, there are almost six times more silvers found in the multi-packs.

It should be noted that if the average number of red pulsars in a case is lower than 6, then the population of both silver and RWB prizms found in this product increase substantially (even 5 red pulsars per case would add nearly 300 silvers and 600 RWB of each base card). I did my best to count the number of other parallels during the video, as they were not all included in the recap at the end.

Returning now to the Fast Break boxes, which started my train of thought. 2017-18 was the first year Prizm Fast Break was produced, and included 8 exclusive parallels:

If you read the whole article, you may already notice the general trend of the 2017-18 Prizm Basketball print run, particularly when it comes to silver prizms. If you did not read the whole article, but are more interested in the hard data, the chart below shows the approximate population of each form of a Prizm base card (including the white sparkle, which was an online exclusive that Panini confirms has a print run below 20 for each card).

Based on my calculations, the print run of silver prizms in 2017-18 is likely similar in number to the red-white-blue prizms. If you follow eBay sales, you will quickly discover there is however a significant sale price difference between the two parallels.

The most logical explanation for the difference in cost would be consumer demand and expectation. The silver prizms are a familiar product for most collectors, as it has been a fixture of the product since its first incarnation, when prizms were included at a rate of just two per hobby box. PSA records for this set show over 20% of my silver prizms estimation for Jayson Tatum, Donovan Mitchell, and De’Aaron Fox—the most popular 2017-18 rookies according to PSA population—are already graded, which is a rate over 10% higher than their graded base rookies and a consistently higher grading rate than other five unnumbered prizms of those respective players. Clearly, the market sees silver prizms as a worthwhile commodity to invest in.

Can these values be sustained over the long term, while other, less common parallels are available for less? Time will tell. Maybe silver prizms will remain the most popular, yet accessible color in the Prizm basketball set. In the meantime, it may be wise to look at the relative value of each parallel as you consider your purchase, whether you are an investor or a hobbyist.

This was an excellent article that provided a valuable look at how to calculate print runs. If there is anything you would like to add to help the community, we would love to hear from you.

Celebrating One AMAZING Year and WHAT’S NEXT for Sports Card Investor! 🎉