Whether you are a novice or seasoned collector, the answer is simple. We enjoy watching and participating in many types of sports. This is typical across the world, and some collectors and investors have a tendency to become more involved than others. I have a typical story, as I began following hockey in 1976 (at the age of 4 years old). HOW did this happen? Quite simply, my late father, uncles, and cousins followed Hockey Night in Canada on Saturday nights. This became a regular occurrence, that everybody got together on Saturday evenings. I felt like I never really had a choice! I was awestruck by hockey and had dreams of playing in the NHL, just like my cousins did. So the dream begins like many of the other Canadian boys, My allowance from my father was $1.00 per week in 1976, and dad used to take us to the local 7-11 convenience store on Saturday afternoon. Every single Saturday, I couldn’t wait to see hockey no matter which teams were playing. Our broadcast network usually showed either Montreal or Toronto, sometimes even playing against each other. I confidently knew my purchase at the local convenience store, as it became the same purchase every week. Six-packs of O-Pee-Chee NHL or WHA trading cards. The local 7-11 carried hockey cards of the now-defunct World Hockey Association. They were distributed in the franchise cities back in the day. So six-packs @ 10 cents each, along with a small Slurpee which was 15 cents at the time. This left me with approximately 25 cents for the remainder of the week.
The rest is history.

2. COLLECT within your price range.
Whether you are a young or veteran investor, ALL collectors must collect within their budget. Whether your allowance is $1.00  per week or you live independently with a surplus of cash flow, we all should formulate a plan with these guidelines. It becomes very easy to leave the local sports card shop spending more money than you anticipated. Given the price of today’s market on hockey cards, it has sadly been taken out of the hands of youngsters and shifted towards adults. Affordability should be paramount when you decide or determine your purchases.
Stay within your budget. As a newcomer to sports card investing, you will immediately want anything and everything. That is fueled by the passion for the hobby.

My advice to collectors is to purchase the best card that is within your price range. For example, If my budget allowed me to purchase a $50.00 Sidney Crosby rookie card (RC), then that would be the purchase. Some investors opt to save their money for a larger purchase on certain players, maybe a numbered or autographed RC. This generally comes at a greater price, based on the features or scarcity of the card. Don’t get caught up because your friends or co-workers are purchasing more advanced cards; Take heed of this valuable advice. Slow and steady wins the race. 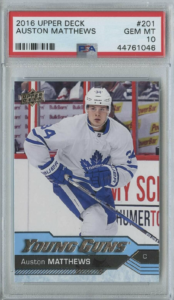 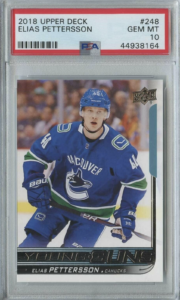 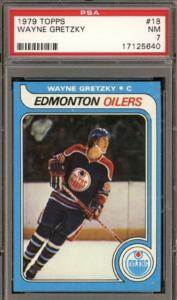 3. UNDERSTAND your purchase.
Many collectors and investors have absolutely NO IDEA as to why they purchase the item(s) that they do. Some people purchase cards because they are on the Hot List, and know very little about the player(s). You need to do your homework and stay updated on teams, trades, and trends. Research players and ask yourself “why am I buying this card”. Maybe it is your love for the player, or they play on your home team that you follow. You notice a certain trend; I love collecting goal scorers; they draw the most hobby attention. A player has become HOT and you purchase a lot of 10 or more cards for reselling. Whatever your reasoning is, know why you are making purchases because those become GOOD purchases generally.

4. WHY certain players?
One of the MOST important factors in collecting. If you are a collector, you could build your collection around a theme. For instance, my dad collected the 500 goalscorers of all time in the NHL. He often saved his money for “the card”, as it became a two-fold task for him. He needed to have the money on hand regularly when shopping around, as well as putting in time at local card shows or flea markets. These are RARE cards and there was no internet in the old days. Everything was done by word of mouth because eBay never existed. Lots of work and commitment goes into those practices. Even in the early 1990s, the rare 500 goal club members were an elite group of players. Their cards were quite valuable (even in the 1990s) when hockey card collecting became a prominent fixture in our household.

If you are on more of a budget, consider building a set of Upper Deck base cards. You can buy those relatively cheap these days. Study statistics on the back of the cards, and familiarize yourself with them. This will definitely improve your hockey IQ, which in turn can add to your confidence in making future purchases.
It could be as simple as your interest of the player. My uncle’s favorite players were goal scorers who could grind it out and drop the gloves. He loved Cam Neely, Wendel Clark, and Jarome Iginla. These players emulated the type of player that my uncle Cam was in his younger days. He identified in them, because of their style of play. Remember, there are no rules and guidelines set out towards investing or collecting in ANY sport, and you need to collect the player(s) that you enjoy collecting. If you intend to flip them and are unsuccessful, you can enjoy having them as a “hold” for some time.

As an investor, be very careful with your purchases. Understand that you may be left “holding the bag” on certain players. There are many factors that determine this:  injuries, trades, sudden production drop off. This can leave you with some unwanted cards that you may be putting in the clearance bin soon, should you not have an affinity towards them due to investor principles.

5. Importance of MILESTONES.
It is a good rule of thumb that players who reach a certain milestone in their careers become very collectible. As an investor, these players generally become “blue-chip prospects”. There are a number of blue-chippers currently in the NHL:  Sidney Crosby, Alexander Ovechkin, and Carey Price, Connor McDavid come to mind for a number of different reasons. A good investment might be in retired players. I have seen the appreciation in the prices of Wayne Gretzky, Bobby Orr, and Gordie Howe over the years. These players have become 500 goal scorers, Stanley Cup Champions, and have numerous individual awards. Milestones tend to solidify card values over time making your purchase less vulnerable to an up and down trend line.

6.What TYPE or BRANDS of hockey cards to collect or invest in.
Like I stated earlier, collect what you like. There is no right or wrong way to collect, so as a collector you have the freedom to stand behind your purchases.
As an investor it can become a much different approach. You need to take the emotions out of the game and base your investments upon strategy.
My typical approach is this:  This is because I identify myself as BOTH collector and investor. I have typically kept a simple pattern when opening hockey products. I like to collect what the majority of people know and collect. This easily expands your range when making sales or flips. I collect the Upper Deck series of trading cards. These tend to have the bulk of the best rookies, but that focus is changing due to marketing conditions. Upper Deck has primarily tried to balance the rookies between both Series 1, and Series 2. This allows them to have a rather even print run on their product. The Young Guns series has been proven a winner year after year! They are considered the safest purchase among collectors and investors alike.
I complete a full set of Series 1. This becomes a safe play, thinking that I have a complete balance between future stars and sleepers. During the completion, I may have a few doubles and triples. I tend to HOLD them and enjoy thumbing through the monster boxes every so often. You never know what you are going to reveal in those heavy boxes! I watch the games closely and with intent. Obviously, I have the NHL channel, along with NHL Centre Ice. I justify those purchases because I typically don’t attend Winnipeg Jets games in person. For the price of attending 1 NHL game, I can be entertained by one full year of hockey every day, from about 6 pm until midnight should I wish.

I will also collect a full complement of Upper Deck Series 2. Same strategy as Series 1. For about $100 CDN, you get six young guns RC’s, and I can make a few base sets to give away to nieces and nephews. Your odds of hitting something within the 6 rookies are much better than other products, because they are guaranteed within one box. Maybe less risk and reward, but more consistent of a break.
I personally try to refrain from opening Upper Deck SP Authentic. The card quality is good, but the on-card autographs are definitely less to be desired. Players are signing so many cards from different releases these days. Unfortunately, many players view this as a hindrance to them, even though they are getting paid to do so. The last thing that I need is a card with a sloppy signature, often just bearing the player’s initials. The price point is too high to get a Future Watch Auto that you are unable to enjoy because it looks like your kid has just signed it.

I may purchase singles on the open market, if they meet my criteria. This is where personal preference comes into play. My Future Watch pickups have to have a clean signature on it, with no ink smudges. This can eliminate a large number of players. I love the idea that players are depicted individually, rather than a cluttered shot with other players in the background.
Of course, the last factor is condition. I am a picky investor, so the card must be in at least NM-MT condition or better. Examine your purchases closely. Remember, condition affects resale value, so spend your hard-earned money wisely.

7. Don’t let short term investments trip you up.
Simply put, don’t worry about losing money in the short term, but rather hedge your bets accordingly. Consider the information above. Follow sports very closely. The majority of sports cards do not take off immediately. Be comfortable in holding, and if you take a loss, don’t sweat it. You will find that, if you follow my principles outlined above, you will come out a WINNER over time.
Be careful when you flip cards, as there are many important factors that you need to determine. These include sales tax, eBay fees, assess proper shipping costs, etc. These cut into your overall profit and sometimes tend to get missed out when factoring a sale.

You will make many friends and acquaintances along the way!