My reintroduction into the hobby started on a 2016 evening in Spring. A flimsy, yellow, unsealed box, full of 24 packs of 1990 Fleer Basketball “junk” lay before me.

First off, I have to note that I was once a teenage collector in the early to mid-1990s. The packs I pulled from the shelf of my local Wal-Mart during this time are now known as junk. I was living in the “junk era” when basketball cards were being mass produced. Due to the success of the 1986 Fleer basketball set, which included first appearances of the incredible 1984 rookie class on cardboard, the interest in basketball cards had reached a new peak by 1990. Card manufacturers were further compelled to find the next big player and print tons of product for collectors to consume.

A well-known UNLV kid who would come to be known as “Grand mama” would dominate the hobby before he even reached draft day. The young basketball shoe wearing granny was Larry Johnson, drafted in 1991 by the Charlotte Hornets expansion team. His college cards were so heavily produced that numerous unopened boxes of 1991 draft pick cards with guaranteed Johnson “exclusives” sit on the cyber shelves of Ebay at prices so low, my teenage self would have screamed in excitement back in 1993. Currently, Larry Johnson’s Upper Deck rookie card sells for about a dollar plus shipping on a good day. To add further injury to an already saturated market the next “big thing” was even bigger than Larry. Orlando Magic’s draft pick, Shaquille O’Neal put the final nail in the coffin and the over production of basketball cards in general probably outweighed the demand 100 to 1, particularly where it came to base, non-insert cards. 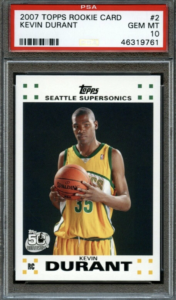 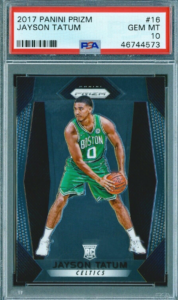 So why re-enter the hobby at all? Why a box of 1990 junk era basketball as my inaugural box break and how in the heck can anyone expect to make money off of junk wax? Aside from the nostalgia and excitement that a former collector derives from opening packs, there would seem to be no obvious financial benefit to opening any product from 1989 – 1994. Three words: Grading, Jordan and the nostalgia I mentioned.

Okay it does not have to be Jordan but for my first real trail run in investing I went with what I knew. So, the wax wrappers from ’90 are littered all over my floor in 2016 and I have four 1990 Fleer Michael Jordan base cards, number 26. I had bought this box for about $40 (too much). I learned from my over payment mistake and the second 1990 Fleer box I purchased was about $20. I break the box, I have more Jordan’s. The beauty of having 8 -10 of the exact same card; comparison.

I had re-entered the hobby for one reason: to make money from grading cards and to take advantage of the fore mentioned nostalgia of buyers my age. I identified that a slow trickle of 1990 Fleer Beckett graded Jordan number 28’s from this 1990 set were showing up on Ebay and I wanted a piece of that action. I have 8 Jordans, I line up the red and blue lines on the borders and slide the raw cards across the table; viewing the horizontal centering and the vertical centering. I reject the Jordans that have blemishes or waxy residue on them and for my 2nd ever Beckett grading submission I choose the best looking 4 cards. (I will write an article on my first submission at a later date. Suffice it to say it was another mistake from which I learned a valuable lesson).

Let’s stop and do something I hate: math. I bought two boxes of wax at $60 and found four Jordans worthy of grading. I placed the cards on an Excel spreadsheet along with the individual price it cost to grade each card, I came up with an estimated grade, and tracked what that grade was selling for the whole time I awaited my order to return.

Unboxing my BGS order; a collector’s penultimate mail day. Do note that I am not a collector at this time, but instead an investor. I am being sucked back in to collecting at this very moment. More on that later. I open my USPS box full of freshly graded cards and two 1990 Fleer Jordans are BGS 9.5, the other two are 9. I already know my target selling price on a 9.5 is about $60. I quickly sell one 9.5 for $55 and the next for $65. The other two 9’s are sold at around $30 – $40. Again with the math: Wax box $60, grading 4 cards plus shipping $25 is $85 spent. I took in about $195 before Ebay and PayPal fees making my return on just these cards mentioned $100.

So, at this point I am back in love with basketball cards. I want to collect! I have more disposable income than I did when I was buying a pack a week with my hard earned allowance in 1993 but not much. I live in a small three bedroom house with three kids and have two car payments, after all. How do I fund my collection? I flip junk!!! But I want to point out that sifting through the wax and finding gems is actually quite easy.

I would also submit that my generation’s cards are not necessarily junk. 1993 Fleer Ultra Michael Jordan Scoring Kings, 1993 Fleer Ultra Power in the Key, Fleer 1992 Michael Jordan All – Star, Fleer 1993 Michael Jordan Living Legend and list goes on and on; these certainly cannot be “junk”. How can I afford to purchase hobby boxes and packs in the “Age of Zion”? I sell the old to fund my rookie investments for the future. I am buying and holding raw Jaren Jackson Jr. securely by paying a premium to grade other people’s PC cards from the past.

The only skill involved is catching the trend at the beginning and beating the market which can be difficult with the grading wait times. I call this the “time factor” but this can be managed. As of this writing the Michael Jordan 1990 Fleer # 28 card is selling at about $35 for a BGS 9.5. That card had been even cheaper a short time after my 2016/ 17 sales. I have moved on to another few specific cards and have managed the “time factor” by utilizing a quicker turn around service with a quality grader and the comps currently bare out to turn a profit. With limited cash on hand I am storing my “hold cards” safely and will encase/ grade them later. I currently solely grade for resale to fund my PC.

Above all else this process is fun and I have enjoyed every aspect of re-integrating myself into the hobby. Even the failures have been beneficial. If you are on a limited budget flip a specific set or card you know and use you profit to purchase what you truly want!

For more on this topic, watch Sport Card Investor’s
interview with the author, Chris Fine:

What do you think of this strategy? How are you funding your collection? Leave your thoughts in the comments below.